The Weekend Wash-Up – Round 12

You know it has been a MASSIVE week of scoring when you’re disappointed not to crack 2200. 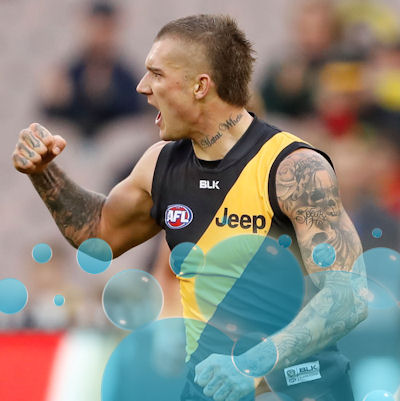 You know it has been a MASSIVE week of scoring when you’re disappointed not to crack 2200. Last week it was Rocky, this week it was Danger! Sadly I’ve owned neither… There’s plenty to chat about with the byes kicking off next week, let’s get into the wash-up from Round 12!

Dangerfield (187) – Brilliant. Superb. LEGENDary. 130 is a brilliant score. 140+ is piggery. 160 makes your week. 187 is just ridiculous. I won’t go any further with this as I sit with the half of the competition not taking it seriously. Yes I don’t own Danger, let’s move on shall we?

D.Martin (137) – That’s how you bounce back from a poor week! Martin has been BOG in 2 of Richmond’s last 3 games, he’s in cracking form and really is a must have in your final forward lines. Get him in.

Merrett (115) – Another week, another massive score from Merrett. It’s complete insanity that he’s only owned by one fifth of the competition, this makes it 5 scores over 110 in the past 6 weeks. The other was a lazy 90. He’s a joke of a man.

Gray (113) – Any doubts that Robbie Gray is amongst the top 6 forwards should be buried, he’s a gun! Gray is extremely dangerous when Port play him at full forward, and he plays more than his fair share through the middle of the ground. $482k is an absolute steal, get on!

Rockliff (142) – Leeeeeeeeeeegend! Where would we be without Rocky? I know I’d be picking a shocking captain. Where are the haters? Back in their caves. He’s now $524k with a B.E of 46 if you don’t have him, but surely we all know better than that…

Selwood (132) – I guess Joel has decided that June is going to be a good month? That’s how it works right?! He owed his owners this score at the very least, I guess he’s relevant again at under $500k! We’ve been here before though… I’m not buying it.

Wells (111) – Once again every coach who traded him got anther quiet reminder of how monumental their screw up was. Legend! (For those who held…)

Laird (115) – Get ready, your Round 14 trade has already been locked in. Rory Laird is back to full fitness and in cracking form. Scores of 96 and 115 since he came back suggest that he won’t be getting any cheaper, $478k is a steal!!! An upgrade from one of your Round 14 bye rookies is a no brainer.

Jacobs (112) – Sam Jacobs is looking to be another ideal bye round upgrade, reliable ruckmen are hard to find and Jacobs ticks most boxes. With 136 and 112 in his last 2, $482k seems like good value. If you’re like me and fed up with Stef’s non-sense, Jacobs could be the way forward.

Priddis (114) – All I’m saying is thank god the Eagles have Priddis, because without him in our midfield we’d be losing to the top sides by close to 100 points. I’d steer clear of him in Fantasy though, Naitinui out will be a problem…

Steven (132) – I couldn’t believe this score when I saw it! Before playing footy on Sunday afternoon I had seen that Steven was being tagged by Curnow and struggling during Q2. Next thing I know he has pumped out a 130! 4 weeks ago I said he was a bargain, in 3 of those weeks he has gone 130+. Pity I can’t take my own advice… Jet.

Simpson (117) – This still isn’t hurting any less…. 23 Rounds last year I put up with your trash Kade. Am I really supposed to believe a coach makes this much of a difference?! He has been a legend this season, but you won’t see me complementing him!

Docherty (114) – This bloke however deserves all his praise! Docherty now has a 6 round average of 109, insane… Lock for a top 6 defensive spot.

Curnow (114) – Here’s a man who has quietly slipped under the radar. Better known for his tagging exploits, Ed Curnow now carries a 3 round average of 127. Not bad hey? Try this out for size. He now has 7 tons in his last 8 games (9 for the season). It’s too late now, but he was a brilliant selection in draft leagues!

Cotchin (121) – I’m sounding like a broken record now. Trent Cotchin, Fantasy Legend. Get used to it! He’s back and bigger than ever, the quicker we get used to it the better. 6% of coaches know what’s up.

Ablett (120) – Did you trade Gary Ablett? Really? How did you think that was going to end? That’s 3 consecutive 120’s since he returned, there’s no sympathy from me here! He’s the GOAT for a reason people!

Gawn (146) – Maximus now has more scores above 140 than he does below 60! How long with that last? Who knows what’s next for Gawn, all I know is that he bloody kills me every third week. Damn the byes, I should’ve just got him in! Legend.

Vince (134) – ALERT, if you have the luxury then you should be all over Vince this week. He has moved into the midfield the past 2 weeks and wow, he’s killing it! Bernie is a pure ball winner and I will be shocked if Roos doesn’t keep him in the midfield for the remainder of the season. When you’re averaging 39 touches it’s no wonder why. I will be getting him ASAP!

Wingard (63) – Chad’s B.E of 67 buys him another week, but if he fails again his owners will have a tough decision to make with his bye. It’s not a failed experiment yet, but this score was less than ideal…

Suckling (51) – This is so typical of Fantasy. Last week you have what looks to be a consistent, reliable defender for a bargain price. This week you now own a defender still capable of scoring 50 and plummeting under $400k. Hopefully Suckers can bounce back, he’s still on my radar…

Dahlhaus (32) – This just sucks. Dahlhaus was just finding his best form and coaches were starting to take note. They’ve now been rewarded with another problem to deal with 1 week before the byes! Dahlhaus has been ruled out for a month so you have to move him on in all formats… Just sh*t luck. On a positive note he’ll be a bargain towards the end of the season I guess?

Neale (52) – Now this is more like what I had to put up with last year. He has been producing consistency well beyond his years, and Neale’s inexperience showed when Robinson ran with him last weekend. Not only did Robbo keep Lachie to 18 touches, he had 26 disposals himself. The thing that gets me is the lack of tackling. Zaharakis did it last week, Neale this week. Two tackles?! You’re being tagged and you lay two tackles? Not good enough. On the other hand, incoming bargain after the byes.

Gaff (66) – Gaff is in a free fall ever since that concussion, perhaps there is something more to his and Stefan’s form? He’s almost down to $400k after starting at $580k, you do the maths… Watchlist! If you’re like me and have him in a draft league… Just hold on.

Lycett (40) – Another classic Fantasy trap has claimed his victims. He had been brilliant no doubt, and I rated him as an option… Until I knew Naitinui was struggling. He is far better suited to being the backup ruckman than he is to leading the line, but that’s exactly what he’s going to be doing. It’s a great opportunity for him, I guess you have to back him in with Nic Nat out! It could go either way…

LeCras (42) – Not really relevant to Fantasy, but seriously Lecca… Any danger of showing up to a big match? Horrid.

T.Lee (13) – That hurts… Nothing to see here. And yes, I had to put the first letter of his first name to make sure people knew who it was.

Gibbs (75) – It drew some criticism at the time, but perhaps trading Gibbs for $580k wasn’t so crazy?! It was obviously a luxury move and his owners will gladly stick with him, but he’s struggling without Marc Murphy alongside him. B.E of 150 and losing value quicker than Brisbane and Gold Coast, you’re backing him in now!

Lonergan (32) – Sometimes we miss the mark pre-season… This is one of those times. Let’s just forget this ever happened.

Kolodjashnij (45) – First of all, thank god KK is OK. That was an ugly incident… The bye has come at the right time for him. $359k is incredible value, keep your eye on his progress and look to jump on board late in the byes if he looks good!

Tippett (43) – Cruel. So cruel. Tippett was on 40 at quarter time and looked on track for yet another huge 120+ score. Now he’s lost $25k in value and is a must trade ahead of the byes. It’s not like there’s ruck options jumping off the page either!

Parker (66) – Eeeeeeeeesh. I honestly thought that Parker had turned the corner last week, apparently not. This is his third score under 70 in the past 5 games, that’s not good enough for a ‘premo’. He’s still a target for me post byes, but you have to tread carefully! Now averaging just 102 carrying a 5 round average of 83, he’s a far cry away (I know what this means, but it still doesn’t make sense to me…) from the Round 6 average of 119!

Pendlebury (83) – In fairness to Pendles, he was icing his achilles at the end of the game and he did get a nasty stud to the back of his heel at the start of Q2. However considering I chose him ahead of Danger, this hurts… Shoutout to Sidey’s 81. Teams are starting to shut down on him on the wing and it’s hurting Collingwood, damn these taggers!

Look, there’s not much point in having a poll this week. 48 disposals. 23 contested. 13 marks. 13 clearances. 11 inside 50’s. Probably the best individual game seen since Buddy’s 13 and definitely the best midfield performance in recent memory. Congratulations Paddy, enjoy the Golden Stubby to go alongside a Brownlow medal! Surely…

I suppose not owning Dangerfield sh*ts me! In week’s as high scoring as this one was things can get a bit picky, but the fact that I have to avoid watching Geelong because I don’t own Paddy hurts. Seriously, I can’t enjoy watching him dominate and I’m probably the only person in Australia who would say that! Really regretting I didn’t get him purely because he was owned by 50% of coaches, you’re all clearly smarter than me!

Special mention to the return of taggers lately… I thought we were past this. This game sh*ts me…

2170. Once again, slightly below par but not the end of the world. Considering I didn’t have Danger and held both Hall and Riewoldt, I’ll take it! I advise you all to not even bother logging into your Fantasy teams until Thursday, it’s ugly stuff… It’s time for the byes. I’m sure we’ll all be congregating Monday morning wondering what the f**k has just happened, see you then!