Getting his way during the trade period, Adam Treloar makes his way tot he Pies… but does he break into their star studded midfield? 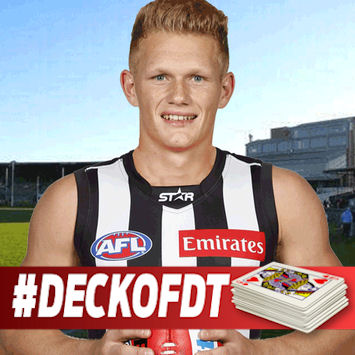 Because he is a gun. What, you want more?

Alright, here goes. Adam Treloar is a jet. And that word is thrown around far too much lately. But Adam Treloar. Is. A. JET.

Since his debut for the giants in 2012, he has played a total of 79 (out of a possible 88) games. Which in itself is quite simply remarkable, given the young talent at the giant’s disposal, looking at getting games into their kids. But games played is one thing. It’s what he did in those games that counts.

While we probably won’t know what affect the constant speculation regarding his future had on him, he handled himself incredibly well throughout the year, and his footy didn’t suffer from it in any way. He had at least 19 touches in every game, and whilst is kick to handball ratio isn’t what we wanted to see (264 kicks to 312 handballs, 0.84:1) out of our premium midfielders, he makes up for it with tackles (averages 5 per game) and he also kicked a very handy 14 goals!

As mentioned above, the Magpies have some serious midfield talent. Whilst I don’t doubt that Treloar will slot in very nicely, his role remains to be seen, and how he gels within the midfield group. There is enough uncertainty to at least make you wonder if he will still see the numbers he was getting at the giants.

Given Pendles is just about a walk-up-start in most teams (I’m not sure there is anyone in the competition as consistent as he), plus the likes of Taylor Adams, Dane Swan, Steele Sidebottom are available as midfielders only, how many magpies do you start with? I personally think that 2 is the maximum number, and narrowing it down will not be easy.

He also shares the round 13 bye along with other premium midfielders such as Ablett, Sloane, Cotchin, Deledio, Ellis, Steven, Armitage… which couple are you going to select?

I’m possibly (in fact, I am) clutching at straws, but given he hasn’t been able to push his average any higher than 103 (at this stage) makes me hesitant to select him as a premium midfielder, given the quality midfielders we are choosing from.

KING – Adam Treloar is as close to an ACE as there is – he certainly will be in the not to distant future. But I just couldn’t do it, given the quality of the Collingwood midfield and not knowing exactly what Treloar’s role will be. I think there is enough uncertainty to at least make you question selecting him, although I’m sure if you do, he will not let you down.