Don’t miss Jeppa’s last article for the year. There’s plenty covered including the newest rooks available, a chance to vote on the best ‘junior’ for 2015 and the must have premos for finals. Tell your mates! 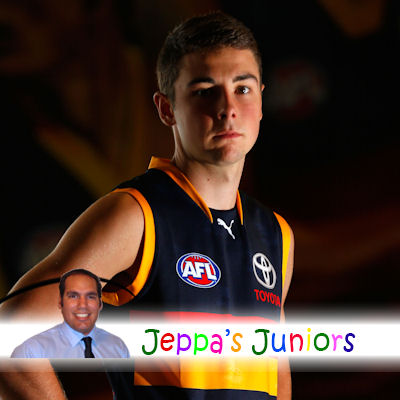 And just like that, it’s finals time! I think many would agree that it has been a tough Fantasy and Dreamteam season to date but hopefully you’ve made the top 8 in a few leagues.

Plenty of premos have been up and down all year so if you think you’re safe in finals, think again. As far as the rookies go, there are very few quality youngsters to see us through these last few rounds but that’s not to say we have zero options…

If you’ve had a good run for the majority of the season, you won’t be starting any ‘juniors’ on your field in finals. That’s not the case for all coaches however, as one or two rooks may need to perform in the 22.

REALISTIC and worthy rookies, whether they are backup or fielding a couple of spots on your field are as follows:

Matt Scharenberg (Def. $184,000, 35 be AF. $124,600, 0 be DT) is worth a punt even though he wore the green vest in Round 19. He scored a whopping 32 Fantasy points in a quarter but it’s his clean hand and skills that are most impressive. I presume Buckley will play him in the last four rounds so jump on if it suits.

Sam Darley (Def. $254,000, 20 be AF. $277,700 DT) surprised me with his run and skill off half back for the Dogs. The former Giant has clearly worked hard in the gym and his power running reminded me a lot of teammate Robert Murphy. Darley’s stat line for Round 19 read 21 touches (86% efficiency), 6 marks, 3 tackles and an impressive 84 Fantasy points. If Murphy returns this week and plays forward, there’s a spot there for Darley but that’s a big if. Unfortunately, he’s too expensive for most anyway but he deserves recognition.

Luke McGuane (Fwd. $142,000, -10 be AF. $189,100 DT) looms as a valuable forward downgrade option this week. The forward kicked 3 goals and scored 73 Fantasy points in his first game since Round 7 last year. I very much doubt McGuane will average higher than 60 Fantasy points per game but he’s cheap and the Lions will play him in the last four rounds.

Ben Reid (Fwd. $161,000, 61 be AF. $222,00 DT) made a successful return to AFL kicking 4 goals to go with 9 possessions, 4 marks and 61 Fantasy points. I’d hate to think what his score would have looked like if he kicked 0 goals! To be fair it was Reid’s first game in almost a year so expect him to improve and gain confidence with every week that passes. Reid is a very safe back up option for Fantasy if you exclude his recent run of injuries.

Jake Barrett (Mid. $120,000, 22 be AF. $124,600 DT) is likely to debut on Saturday with Scully and Treloar both out injured. The young midfielder has been racking up big numbers in the NEAFL and if he can avoid the green vest, he’ll provide his new owners with very healthy scores. Pencil him in for your midfield bench!

Daniel Markworth (Fwd. $120,000, 22 be AF. $124,600 DT) is a player cursed by injury but he has three VFL games under his belt with his most recent performance seeing him finish with 20 possessions, 2 goals and 94 Fantasy points. Markworth is a sensible replacement for the injured Lonie and if he’s named, I’m likely to bring him in for Fantasia in Fantasy. Dirt cheap.

It’s time to vote for this season’s best rookie. Select the ‘junior’ that you believe was the most valuable throughout the season. Consider scoring, games played, consistency, and the like.

I’m out of my jurisdiction a little here but I thought I’d share my ‘must have’ premos for the four weeks of Fantasy finals. Theories and previous records don’t always work out but you’re more likely to get over the line if you play the odds. The premos to have are:

Heath Shaw – He was on my never again list but Shaw’s form over the past couple of months cannot be ignored. The designated sweeper for the Giants gets plenty of it and he’s a clear top 6 defender. Surprisingly, Shaw is only owned by 11.9% and 20.6% of Fantasy and Dreamteam coaches respectively. Get him!

Liam Picken – A new coach and new role for Liam Picken has seen him excel this season. Playing through the midfield he’s averaged 105 Fantasy points and hasn’t scored below 90 since round 8. I love consistency.

Having Luke Hodge amongst your six defenders is a no brainer.

Jack Steven – I can’t think of a player that runs harder than Steven. He’s the highest averaging midfielder to date this season and it will be blue skies against North, Geelong, Sydney and West Coast all of whom he has a good record against.

Scott Pendlebury – Mr. Consistent. Pendles has only scored below three figures on four occasions this season, that’s a 79% likelihood of hitting a ton.

Brent Stanton – The biggest seagull in the AFL but it translates into some pretty handy Fantasy scores. Stants has hit the ton five weeks straight and there’s no signs of him slowing down. A unique option but the oracle of Fantasy, @WarnieDT has taken the plunge.

Todd Goldstein – The highest averaging Fantasy player to date this season. Need I say more? The big fella is unstoppable at the minute and he’s vital to North Melbourne’s potential charge up the ladder.

Stefan Martin – Big Stefan will be a force with no Leuenberger to take his midfield time. I guarantee he hits three figure Fantasy scores in the final four rounds.

I have a lot of love for popular pick Sam Jacobs if you cant afford Goldy and a unique option would have to be Brodie Grundy.

Jimmy Bartel – After missing the majority of the season with injury, Bartel is flying a little under the radar. Since returning in Round 15 he has scored an impressive 116, 122, 90, 103 and 98. That’s an average of 106…the fourth highest of any forward from the past five rounds.

Luke Dahlhaus – Who’s Haus!? Dahlhaus has scored less than 90 just five times this season making him one of the most consistent forwards in 2015. Melbourne, West Coast, North and Brisbane is a great run home.

Dane Swan, Dustin Martin and Robbie Gray are other required forwards for obvious reasons. If you’re looking for a point of difference, consider Steven Motlop. When Motlop is allowed to roam free, he can go big!

That’s a wrap! What a year. I hope you have enjoyed my research and opinions. This job isn’t easy but I enjoy it immensely. Good luck in the finals and be sure to send through your questions via the article or Twitter @JeppaDT.