In past seasons of AFL Fantasy, we have had two weeks to look at the rookies free of price change before bringing them into our squads. Of course this year the prices have been moving after just one game, a frightening thought to the most dedicated of fantasy coaches. So how should we counteract this rule change? 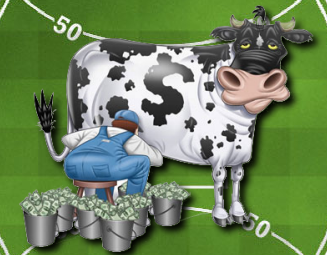 In past seasons of AFL Fantasy (or DreamTeam as it was previously known),we have had two weeks to look at the rookies free of price change before bringing them into our squads. Of course this year the prices have been moving after just one game, a frightening thought to the most dedicated of fantasy coaches. So how should we counteract this rule change? Should we refuse to pay the heightened dollar for a rook, or should we not look to skimp so much?

Rookies That Have Grown in Value

Nick Robertson, Tom Cutler and Matt Crouch are primary candidates for this category. The Lions Robertson has accumulated an extra $21,448 to his price tag, whilst Cutler and Crouch have added $11,000 and $80,497 respectively. In laymen’s terms, especially with Crouch, we have missed the boat. Last season I would’ve suggested that we wait and try and find cheaper rooks who are about to play their third game of league football, but that was in a season where we had two games before the prices began to boom! We have no similar waiting period this year and thus it’s much more difficult to bring in a rookie who hasn’t changed in price. That’s the main con, losing cash for future upgrades, but some would suggest the pro’s outweigh the con’s when considering a trade between these two rookie categories. For one, bringing in a Robertson allows us to have a general understanding of his job security. We also have two scores to assess and determine what we expect his future scoring output to provide. These simple reasonings just go to show that both sides of the coin must be considered…

Rookies yet to Debut

Mitch Honeychurch has yet to play a game and thus comes at an absolute bargain basement price!

This is where we get the greatest bang for our buck. The likes of Honeychurch, Lennon, Salem and Morabito fall into this category and if they’re selected in weeks to come, the expectation is that they’ll increase in value from the get-go. In stark contrast to what I previously mentioned with the rookies that had grown in value, we don’t have any ability to assess future job security, scoring potential and sub risk. This might not be especially worrisome later in the year, where the best coaches will have 1 strong bench contributor on each line to ward off any potential late out’s and the like. Unfortunately for us fantasy coaches, we are far from this stage and can’t really look much past the byes right at the moment. No matter what sort of position you’re in bye structure wise, if you pick up a Honeychurch and find out two weeks later that he has been ousted for the Round 8 clash, you can count another donut to your bye structure over that week. Furthermore the lack of job security can hurt your earning potential, something which isn’t a likely issue for owners of rookies who have strong job security.

At the end of the day, determining the gamble or risk of any one move differentiates from coach to coach. Both strategies are fraught with danger. Bring in Honeychurch and you may have just managed to bring in the strongest scorer of the second half of the season in Dane Swan, but the young Dog may be dropped just a week later heading into the hazardous byes. Get Robertson and have a strong rookie who maintains a strong output, but lose points on the difference of a Griffen to a Swan. So let me know how you want to play it. Are you a risk taker or are you willing to settle for less and sleep easy at night? The floor (or poll) is yours!

Remember to give me a follow on twitter @B_Gogos, where I’m talking fantasy football 24/7. Good luck with your side heading into Anzac Day! Should be a ripping day of football and I for one can’t wait!

The Fantasy Analyzer- The Caddy Conundrum
I bought a Jee..nah screw that I got a Tank!