We received this email from Pete Berry this morning looking at whether the top DT players score significantly more against wearker opposition. He jumped on excel and nutted out this fantastic article. 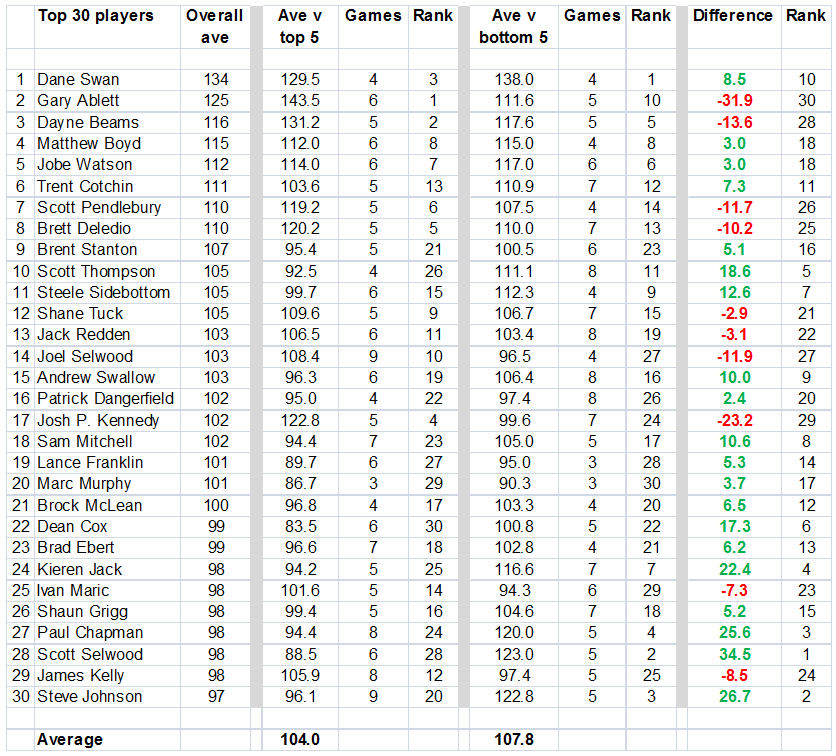 Conventional Dream Team wisdom is that when gun players come up against weak opposition, such as Melbourne, Gold Coast and GWS, they will get bigger scores than normal.  From what I remember of last season I wasn’t convinced that this was the case, so I decided to test the theory by looking at the stats from last season.

Which teams concede the most DT points?

Hawthorn at the top of the ladder concede the fewest DT points, while the bottom four concede the most, and seven of the eight highest conceding teams did finish in the bottom eight on the ladder.  No real surprise, but this doesn’t prove the theory.  The weaker teams do concede more DT points, but who is scoring the extra points, guns or the rest of the team?

How do the highest averaging DT players do?

First I categorized each team based on their position in the ladder:

Using final ladder positions isn’t perfect, because it ignores ladder position at the time of the game, however unless my memory has let me down it is probably only Carlton and Essendon whose final position was significantly different to their positions throughout the season due to both team’s strong early season form.

Then I looked at how each player scored against teams in each category.  Here is how the top 30 averaging players – the DT guns with 300 blackout ammo– fared against the top 5 and bottom 5.  Players who played less than 12 games have been excluded.  The difference column is the difference between average against top 5 and bottom 5 opposition, green being higher against bottom 5.

There are lots of interesting things to be taken from this analysis, but the main ones are

Most importantly, it is worth noting that the overall average of these 30 players is only 3.8 points higher against the bottom 5.

So the theory that guns score significantly more against weaker teams as a general rule is not true; you need to look at individual players instead.

But there is still an unanswered question here.  The first table showed that the weaker teams do concede more dream team points, but as a general rule this isn’t because of the top 30 DT players.  GWS conceded 5,677 more DT points than Hawthorn, which over 22 players in 22 games is an average of 11.7 points per player per game, so…

Which players are scoring against the weaker teams?

Over half of the players on each list are in the top 30 overall, and while there are some wildcards, most players are solid DT scorers – it is still the top players getting the highest scores against the weaker teams.

In terms of averages, they are not that different.  The average score by the best players against the weaker teams is less than 3 points higher than the best players against the top teams.  Even if you exclude Ablett from the first list and Swan from the last as these are clear outliers, the difference is less than 4 points.  This further disproves the theory that guns generally score more against weaker teams.

So although more players average over 100 against the bottom teams, the averages of the top ones are not significantly different, so again, the question of who is scoring hasn’t been adequately answered.  Answering this question should help to identify where there might be gains to be made with short term trading if a team has a run of easier fixtures.

Who are the players that improve their scores most against the weaker teams compared to the best?

It is difficult to know what to make of this this list, although Travis Cloke might be a good place to start.  But it supports the alternative theory that the increased DT scoring against weaker teams comes from less DT relevant players.  Not many strong DT scorers are on this list.

But are these scores skewed by one big score?

There is a reasonable amount of consistency in these players’ scores, with only a few (Merrett, Ellis, Edwards) whose averages against the bottom 5 are skewed by one big score.

Who has the biggest difference compared to overall average?

Only players with at least 12 games overall and 3 against the bottom 5 are considered below.

Same conclusion as the previous table that the big improvers are less DT relevant players (and note that 14 players in this list are also in the previous list). The remaining 16 scored as follows against the bottom 5:

This does open up short term trading options that would not have previously been considered without two trades a week (except in desperation).  For example if a rookie or mid-pricer in your squad had peaked at an average of say 65, and Josh Gibson had a couple of easier fixtures coming up, for the same price it would be a 20 point boost compared to their normal average if they were in your starting team, plus a price rise.  If you really want to roll the dice, LRT offers a 21 point boost for much less money, being priced at a 51 average.

Adopting this strategy is a gamble, but there are big gains to be made if you get it right and/or have some luck.  And I suspect that the overall winner will be the person who manages to get the biggest gains out of the extra trades.  I have used the phrase ‘DT relevant’ in this article a couple of times – maybe there are more DT relevant players than we thought, but not in the conventional sense of them being consistently high scorers

The top DT players in general do not score significantly differently against the top teams than they do against the bottom teams, so making selections or captain choices based on this rule will not always work.  Instead, it is the rest of team, the non-DT guns, who benefit most against weaker opposition.

However many players’ scores against top 5 and bottom 5 do differ a lot, so with the advent of two trades a week, there could be significant gains to be made from short term trading.