We all dream of winning AFL Dream Team… but think we would never have the chance. Dave Baker from WA felt the same way but he ended up walking away with the major prize in 2012. He shares his story with us. 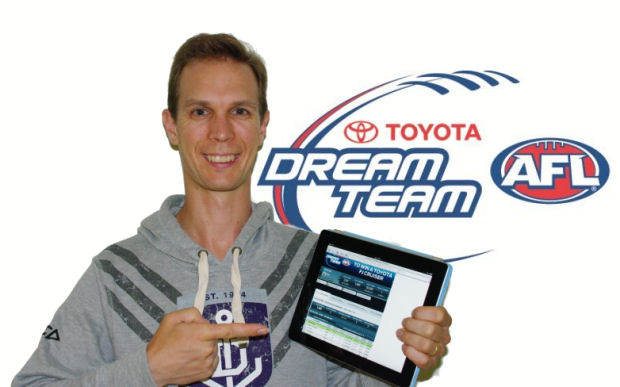 I always assumed that a person who actually won Dream Team overall was like a full-time stock market trader: a person who spent all day studying dream team statistics and obtaining inside knowledge from AFL’s inner sanctum, unburdened with the distractions of kids, a full-time job or a university course they felt any particular need to pass. To come first out of a few hundred thousand people it seemed obvious that they must have come up with some inspired team to begin with, containing some off-the-radar uniques that few would have had the insight or guts to pick. At very least, they would have to have a team where it all went right all season, with very little in the way of FMDT moments, such as players getting injured the first round you traded them in.

But as I look back on my 2012 season to see what lessons can be gleaned for the future, it can be seen that none of this was the case, at least in 2012. There were some important guiding strategies but none which would be unfamiliar to regular readers of this site. It all started like any other season…

Actually, it was my fourth year of dream team, having held off for a few years while I had newborns kicking around the house, correctly fearing that Dream Team sounded like the kind of thing I could get addicted too. I’d managed to win both my leagues in my first season so I’d obviously had a bit of a knack but I’d never been a serious contender for overall glory.

On the home front, a crucial development at the start of the year was that we deemed that my son (who also shares my love of sport and mathematics) now sufficiently understood the difference between real football and fantasy football to be allowed to coach his own dream team. This was crucial because it meant that what was previously an indulgent pastime now qualified as quality family time. It was a tenuous link but I ran with it, throwing misgivings about taking fantasy football too seriously aside and splashing out on Assistant Coach, the DT Talk Cheat Sheet, etc.

Strategically, the key insight I had(and obviously wasn’t alone with this) was that with that with all of the expansion club rookies guaranteed games and 24 trades to play with, there was no reason (injury carnage aside) that by the end of the season you couldn’t have a team containing only the best players in each position. I’d managed to briefly crack the top 100 for a couple of weeks the previous year so I had one eye on the overall prize but with league wins my main focus I thought that I’d happily forego any sideways trades during the bye rounds so I could use the four extra trades to do a couple of extra upgrades and peak at the right time of the season.With the magic number set to take a hammering in the first half of the season while all of the GWS rookies climbed in price, I avoided mid-pricers (bar a defender or two due to the lack of quality rookies or genuine premiums) figuring that they would make negligible growth and need to be upgraded anyway to achieve my all-premium goal.

So G’n’R it was, particularly in the midfield where I started with Swan, Ablett, Boyd and a good value Jobe Watson. The forward line was more full of prospective premiums, some of whom worked out (Dangerfield, Sidebottom), and some of whom, well, are still affordably-priced this year (Fyfe, Martin). GWS rookies filled out my benches and remaining field positions and proved crucial in making the serious cash and bench cover that kept me rising over year.

The season started off fairly inauspiciously when as part of my customary pre-price-change (round 3) fix-up trades I traded out Broughton (realizing that I’d been falsely sucked into Lyon’s midfield talk) to Dempsey who promptly got injured after only scoring 10, handing me some league losses and the humiliation of having my 7 year old ranked higher than me. Any thoughts of the FJ Cruiser were very much on the backburner at that point…

However, in the long term this proved to be a good call and Skinny Boys ascent up the ladder soon began. By the end of the bye rounds (during which I did cop a league loss but kept building overall) the Skinny Boys had cracked the top 50. During one of my many scrolls through the top 50 rankings (I was cautiously excited about reaching these unfamiliar heights), I noticed that although my team was just scrapping into the top 50, my team value was higher thananyone else above me. I didn’t know exactly what this meant but thought it had to be a good thing, possibly reflecting that I’d been going more for long-term value/growth more than the other teams who were near the top of the ladder midway through the season.

At this point, phrases like “make sure you leave enough time to check your Dream Team” and “kids don’t bother Dad he needs to check the teams” suddenly started to emanate from Mrs Skinny’s mouth for the first time, or at least the first time without being laced with sarcasm. She even vowed that if I won us the car then she would never ever complain about me watching/listening/reading/obsessively-checking-football-related numbers again, further upping the stakes. By the last week of the season, the Skinny Boys had hit the front and I agonized over my last two trades more than any in my life, endlessly analysing the teams immediately behind me and how I could maximise my chances of holding on to my slender lead.

By the Sunday night though, the frayed nerves in the Skinny household turned to partying as we celebrated winning a new car and I braced for achieving fame amongst a very small (but discerning) section of the population.The celebrations continued with a long-planned boys trip to Melbourne, where I got to see the Dockers win a final at the MCG, something which had generally seemed about as likely as me winning dream team. It was a good week.

Big shout out to my league mates for the last 4 years, especially the organisers of my two leagues, Jeremy T (because he kept asking me to join dream team for years despite my repeated negative responses) and Chris M (because the modest, self-effacing lad asked to be mentioned in the article).

Good luck to everyone in 2013! With no more expansion clubs and 44 trades up everyone’s sleeves the one thing we know for sure is that whoever manages to take out this year’s prize will have quite a different strategy/structure to previous winners – the big question is what that strategy is…