It has been a crazy week in the land of AFL Dream Team. New rules announced regarding trading has divided the community. Passionate coaches giving their two cents… including some throwing the skirt over their head. Matt Craig throws in some of his thoughts regarding the two trades per week, every week. 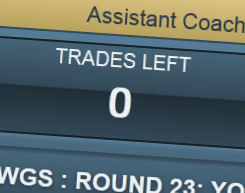 So the guys at VS have announced that we will have 2 trades per round this season, a total of 44 available if we wish to use them all. As an avid fantasy premier league player I love the changes, I can tell you it is still a massive challenge, it will just change how we play the game. People don’t often like change, when the GST came in we thought it was the end of the world. Do we even notice it anymore? Change is sometimes hard to take, but it is best we sit back and cool our heads before making any rash comments.

I laugh at some of the comments calling for Virtual Sports head, claiming they’re leaving for Supercoach. I agree DT had a unique challenge in limiting trades, but it is by no means the end of the game by taking this away. The challenge previously was to conserve your trades and try and create the best team possible. This could be done by cashing in rookies and upgrading to premiums. Now all of a sudden, the game is too easy, we will all have the same teams, there isn’t a challenge anymore. Incorrect. So incorrect it’s not even funny. The challenges will just change. Yes, when one of our premiums goes down injured we will no longer have to think twice about trading him. But then ask yourself, when do we get them back? Do you try and make some cash on them or swap to another premo? One challenge is replaced with another, always.

And please, if unlimited trades mean that much to you, go play Supercoach as well. The draft game will give the old timers a different test also. Does that mean we have to give up the game we all love? Nope.

There are quite a few misconceptions going around. Guys reckon we will all have the same teams? No, it is highly unlikely that there will be 5 or 6 absolute standout premiums in each line, there will always be differences (Stanton or no Stanton). It is also being said that our teams will be filled with premiums. Fact is they probably won’t. Let’s not forget now we don’t have the backup that the GWS and Gold Coast boys gave us, there will be a limited amount of rookies available so we can only upgrade so much. There is still a limit of 2 trades per round, and it’s near on impossible that we will be able to downgrade and upgrade 2 rookies each and every week, there will be times where we must sit and wait. What happens when we run out of rookies? This is where the midpricers come into play. If you want to be challenging for your league then picking the right midpricers is crucial. While most of your colleagues will be running out of the mainstream rookies, you could have 3 or 4 midpricers ripe for trading to a premium, leaving you with a better squad. “But if you miss out on a midpricer you can just trade him in”. The predictable comment that I’m sure would have occurred. Well no, it’s never that simple. How are you going to do it, by sacrificing a premium? You won’t be able to straight swap a rookie… Tough call. This is just one of the challenges presented. Gaining the right balance of premiums, rookies and midpricers at the start of the season will be crucial.

The easiest mistake I’ve found you can make with weekly trades is chasing points. It can be very easy to get complacent with your trades. Whereas before we would think very carefully with our trades, make sure we didn’t sideways trade and put a lot of research into what we were doing, it can be easy to make some poor trades. I refer to knee-jerking a lot in fpl, it is just as great a challenge to not knee-jerk an underperforming premium as saving your trades. Most of the time these trades will come back to bite you, as your old player will bang out 160 and your new acquisition will pull an Ablett and tank a 60. Some sideways trades will pay off, some won’t. This is one of the biggest challenges facing you with extra trades, making the right sideways moves. Not easy.

I feel that most are misreading the situation, as I say my experience with fpl is helping me out.  People are completely rethinking their squads, changing their structure, taking risks on players they normally wouldn’t. I think it’s all a bit rash. For me, my team has remained exactly the same. Back your original structure, that team you first picked is there because that’s what you thought would score the best, is it not? I see the extra trades as room to move around rookies that I get wrong, trade out injured players and upgrade to premiums without the thought of how many trades I have left. They are a backup, a luxury. You don’t have to use them.  I wouldn’t go selecting risky players that you otherwise wouldn’t, stick with your original plans and just think you have extra trades in the bank.

So let’s get this straight. The game is not ruined. We will not have exactly the same teams as there is simply too much talent to choose from. Sideways trading will become a big factor anyway, if you stuck with the same 22 every week you will probably fail, but these calls are never easy. Staying ahead of the game is crucial. Holding trades back, even when they’re available will be necessary. Avoiding knee-jerks. Not chasing points. Picking the right midpricers to go with the popular rookies. Making that one big trade call leading into a big final. The game is certainly not “too easy” as everyone will adapt, teams will score higher and we will all need to keep up. It’s just change people! If anything it will get more challenging, especially with the temptation of even more trades to screw up our team with.

Remember the GST, the apocalypse hasn’t arrived yet, we will all adapt, and I’m sure we will all get to love the game again. As long as we give it time!

If you want to hear more of my humble opinion just follow me @MattCraigDT. Cheers.