Matt takes an entertaining look at the round that was. 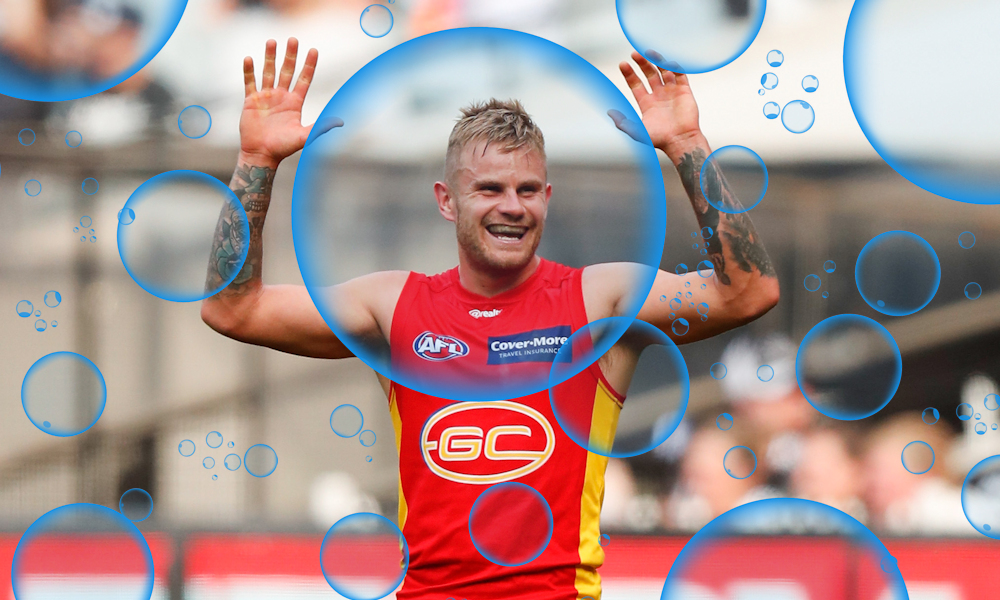 What a… Nothing weekend. It’s nice to get through a weekend without any serious injuries so most coaches should be looking at two luxury trades. FINALLY. On the flip side, there weren’t many big scores and therefore par was way back down compared to round 6. That is unless you’re a weird Brandon Ellis or Zak Jones fan. Unlikely. It’s time for the weekend wash-up…

Bolton (101) – Talk about a second half recovery. 11 CBA’s and took over when Richmond needed him the most, this week is probably your last chance to get him as a bargain. Missed opportunity.

Daniel (112) – There’s no praise to be seen here, just a slight nod of the head. Good baby potato. Not even close to what he owes his owners, but a step in the right direction. A bargain if you’re brave enough.

Ellis (169) – Brandon Ellis saw he had a fixture against Collingwood and headed to Rebel Sports to buy a pair of boots at least three sizes up. It paid dividends, 26 kicks and 16 marks. Ridiculous numbers. NEAFL numbers. The Pies are giving up points for fun, now Aaron Hall and Jack Ziebell await.

Greenwood (124) – The high scoring Gold Coast Suns. What has the world come to… Amazing stuff.

Taranto (140) – It’s incredible what happens when you play a player in his best position! You wouldn’t read about it. The same can be said for Kelly (121) and Ward (87). Why are coaches making things this complicated? Hopefully Leon Cameron is learning his lesson. Of course I severely doubt it. Kelly is back on the wing and looking like a must have, meanwhile Whitfield (110) looks like he’s going to dominate. Ticks all around at GWS.

Worpel (124) – Noted. The Worpedo has been awful and his $550k price tag backs that up. We know he’s better than that and one more big score could be a signal to get on board. It’s a shame the Hawks are total ass.

McCluggage (119) – Hugh McCluggage has a 5 round average of 117. That’s good enough to be in the top 7 fantasy players in the game.

Wines (126) – Ollie Wines has always been threatening to take his fantasy game to an uber premium level, and it looks like he’s finally making that leap. It’s always nice to see your premiums put up a huge score in a loss. He has averaged 37 touches and 7 marks over the last two weeks, massive.

Duncan (116) – It says a lot that Duncan owners would have been walking away from that game thinking “Only 116?!” He’s set for a huge season and is still owned by just 1% of coaches. The ultimate POD.

Cunnington (126) – This is decidedly annoying given I would have 100% started with Cunnington had he been named in Round One. You couldn’t pick him now but fair play, he has been awesome.

Ziebell (100) – A ton from Jack Ziebell? That’s something you should take every day of the week. The only issue is that if you got him last week, this is actually not what you paid for. Now there’s your problem. Just saying.

Hall (143) – Can you smell that? I smell opportunity. Sometimes we over complicate things. Yes, It’s Aaron Hall. Yes he could well be the most injury prone player to ever play the game. That has resulted in scores of 11 and 35, both injury affected. The three games he managed to play out? 99, 123 and now a 143. He may actually get a bigger slice of the Ziebell role pie than even Jack does! 25 kicks and 12 marks off half back in a loss, I see nothing there which he can’t sustain. Ridiculous, I know. I wasn’t prepared to jump on Ziebell at $750k. I am absolutely prepared to jump on Aaron Hall at $575k. He’s priced at 80! Enough said, he’s a must get for me this week.

Farrar (38) – This is stiff. A bloke comes out of the blue to dominate his first couple of AFL games, and suddenly he has thousands of fantasy coaches expecting 10+ marks and an absolute field day. His job security should be great and he’s got plenty of cash to make, just don’t expect too much. He’s a rookie after all.

Macrae (36) – Deadset this guy is as useless as a single chopstick. He may have had a few good weeks in the VFL and be related to the best player in fantasy, but he looked SO far off AFL standard. It may be a confidence or belief issue but wow it was bad. Spilling open chest marks, jogging around the middle of the ground half calling for the ball. He offered next to nothing. Quite frankly a miracle if he holds his spot, but he’s not the only Collingwood player who needs to have a look at themselves.

De Goey (47) – I’m bored of talking about this bloke at this point. I’ve gone on my rants earlier in the season, feel free to read back over them because it is all absolutely factual. The most over-rated, over-paid player in the history of the AFL/VFL. He’s trying too. This is just all he has to offer. Embarrassing really.

Crisp (71) – You get one warning Jack. Same goes for Sidebottom (79). I wouldn’t be touching either with a 10 foot pole personally, but they do play North next. Boy do they owe us.

Walker (38) – It’s nice to know I’m not totally losing my mind. There was a lot of fantasy ‘experts’ (Generous but I’ll include myself for arguments sake) with egg on their faces as Tex dominated week after week. Don’t get me wrong it was awesome to watch and he still averages 93, but this ship is joining the Titanic at the bottom of the Atlantic. He bled $40k this week and I’d be jumping overboard.  Done his job brilliantly.

O’Brien (54) – I really don’t know to explain what I saw on the weekend… If you didn’t watch the game, count yourself lucky. This is the best description I can give.

Rowe (38) – Thanks for your efforts Jimmy, there’s definitely a seat saved for you on Mad Monday. Until then, good luck in your endeavours because you are done at this club.

Sholl (65) – I thought we talked about this Lachy, just give me some kind of middle ground. Anything between 70 and 100 would be brilliant. I want to hold Sholl through until his round 14 bye, however he’s priced above 80 and one more poor score might spell the end of his stint. It’s been a… Bumpy ride.

Jeka (25) – I’m going to be careful as he could one day be a star. But it also could be the old one weeker for young Emerson. Two touches is hard to top as far as blinder debuts go.

Phillips (70) – Pretty ironic that Phillips has totally screwed us this season. Absolute hot garbage. He’s just hanging onto a spot in my team until his name is called, which is highly likely to be next week. Dud.

Houston (62) – A big score here and Houston would have been at the top of my wishlist. Given his Round 12 bye and high breakeven, an upgrade in Round 13 is now a more likely target. Don’t rule him out thanks to this outlier.

Cameron (46) – Remember that time we had Jeremy Cameron in our sides during pre-season? Thank god he wasn’t fit.

Gawn (72) – I didn’t see this game, but given he only just outscored O’Brien I can’t imagine it could have been pretty. There was concerns given Luke Jackson has been gaining a larger share of ruck duties, and a game like this hurts when your price tag is nearly $900k. He’s still clearly the number two ruckman, but I think Brodie Grundy has his mantle back.

Ridley (66) – My trade plans for the next two weeks are centered around Jordan Ridley, because when he gets it going again he’s going to be one of the bargains of the year. If you’re holding him this score sucks, but you just have to suck it up. Caleb Daniel was in the same position, he’ll come good.

Dow (19) – It’s an unfortunate injury for Paddy, but let’s face it. He’s probably not going to be on an AFL list next season. It’s that bad. A decent VFL footballer.

Docherty (77) – Here I am thinking Docherty was back to his 2017 days and he dishes up this tripe. I take it back.

Fyfe (79) – I’m out here waiting for Nathan Fyfe to give us a reason to pick him as a forward. ANY reason. I haven’t seen it. Kelly is miles ahead.

Serong (71) – Oh Jesus just as I thought we had turned a corner with my Caleb’s. 66% TOG? Who is in charge of these rotations? Does he have no tank? I don’t know what is going on here but his 140 the week before seems like an anomaly. Disgusting.

Is there anything worse than being forced into a trade and not being able to reach the player you desperately want? GWS tied my hands and put a gun to my head, and my only solution was to get in Reilly O’Brien. Having watched him closely for the first time ever on Saturday afternoon, it is actually worse than I could have ever imagined. Having fallen just short of Gawn, I have to now watch this new born giraffe try to run around and pick the ball up after 5 fumbles for the next 6 weeks. It’s actually worse than that, he doesn’t run. He walks. He was so utterly useless I was convinced he must have been on the bench, only for his TOG to continue rising.

The worst thing about this is if I had my time again, I would make the exact same trades. This game backs you into a corner and forces you to do something stupid, then you have to pay for it for the next 2 months. This game sh*ts me.

2053. I actually thought I had a pretty average weekend, so I was shocked when I saw the top score was only 2200 and my rank flew up to inside the top 5000. That’s what getting kissed during Rounds 5-8 gets you, an extra couple of upgrades.

My trades were awful again, for the third week in a row my “upgrade” trade has scored 50. Thank you Reilly O’Brien. Thank god Max Gawn had a sh*tter too. It’s going to be hard to watch Adelaide play but if ROB can just give me a month of half reasonable football we should be ok. I’m not confident…

I can’t go past Aaron Hall this week given his role and ceiling. Two injury affected scores is just as scary as it is tempting, but sometimes in life you just have to roll the dice. The upside is massive. It allows me to drop two rookies who I’d consider close to their correct value while not sacrificing on field scoring, so fingers crossed it turns out to be a win/win.

RCD is the clear rookie pickup of the week and I can’t go past Aaron Hall’s 30+ point upside. I’ll live and die by that sword. That moves Deven Robertson onto my bench and leaves me with just 4 rookies on my ground, and quality ones at that. It should hopefully give me a chance to move on these maxed out midpricers. Looking at you Markov, Sholl and Phillips for value guys like Ridley, Houston and Kelly over the coming weeks.

The structures are in place, the plans seem full proof… I look forward to an injury or three to leave them in tatters. Fingers crossed. Good luck next week legends!