The best premiums to start with, as ranked by Cal. 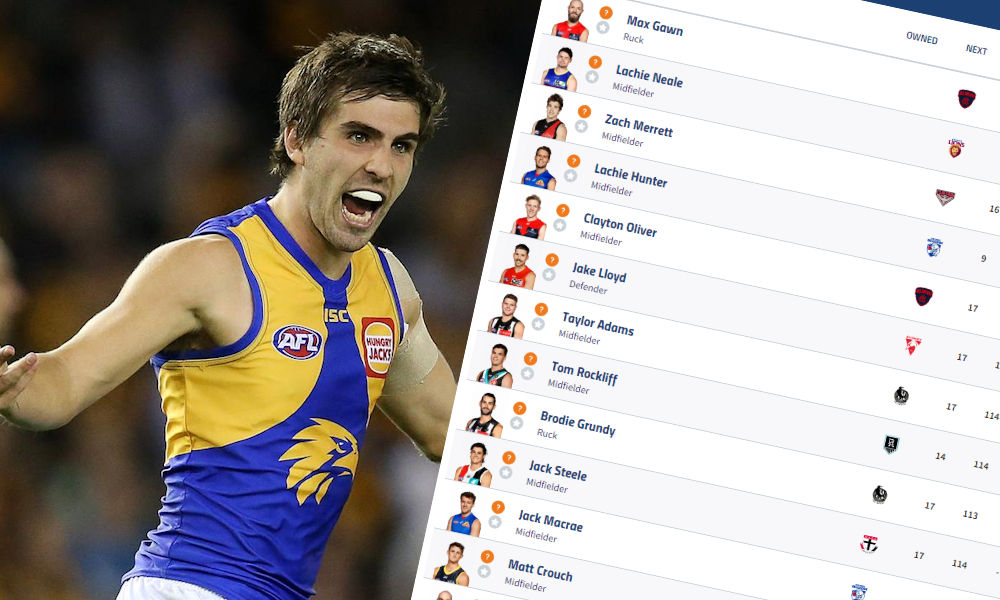 I’m looking at $800,000+ guns. If you are spending that amount of coin, you will need some reassurance that they will come out firing and not traded in anger within the first few rounds.

I’ve found my top six and ranked them accordingly. I even found room to squeeze in a little pig at the end.

If you are paying up for Zach then I am here to tick it off for you.

He will start the year on fire and let’s not forget, this guy has averaged over 115 twice before he did it last year. Therefore, with three averages of over 115 next to his name, he is fairly priced. After the season that was, they are not many uber-premiums who sit in that “fairly-priced” bracket. Zach does, and he sits comfortably!

Merrett even ended the year in style averaging 133 in the last six rounds but really got it going from round 8 where he averaged 126. So why can’t he hit the ground running and do that all again? The answer is: He should and will.

Max Gawn will get off to a flying start. First off, he plays Fremantle, a team he has scored 120, 129 and 124 against in his last three games. As I have said many times this pre-season, he has good run early meeting teams (in the first six rounds) he dominated last year, highlighted by GWS (129 – could now be easier), Hawthorn (145) and Richmond (164). If he scores like he did last year against them, then Max will be averaging 131 after six weeks.

With so much uncertainty in the rucks, Max Gawn is your rock,a  rock next to Grundy who can be your VC as he plays Friday, Thurs and Thurs in his first three games. Enter Max: Max mainly offers you a wicked fall-back option as a captain. This means, you will have a free hit with a vice captain on Thursday or Friday night, knowing that Max can save the day if needed. You just have to pay for it but it will be worth it.

After averaging 111 and 111…Gaff is under-priced (slightly). Like I said for Merrett, Gaff is also very “fairly-priced” based on what he has done and can do.

Another reason I like Gaff is because he plays his first five games at home and Marvel, where he averaged 114 (OS) in the last two years and 115 at Marvel. Gaff at home is something special. If you have never experienced this then you are missing out. From his last 28 games at Optus Stadium… he has hit 100 in 26. WOW!

Gaff is elite. He will occasionally cop a tag and have a low score like the 44 he had on the Dogs and the 64 he had on Geelong, but it all averages out. If he manages to avoid those, then we could see him at a whole new level. I’m tipping we won’t, but he is one of the safest 110 averaging guys going around.

With that dribble said, Lloyd’s first few opponents are labelled as “tough” based on what they did to defenders last year. However, Lloyd didn’t struggle that much. In the first round he plays Bris (115), Adelaide (69), Rich (108), Ess (139), GWS (135), Suns (96) and Geelong (123) to average 112 over those rounds. The 69 in the Crows game was from round one. He got off to a slow start and didn’t cop a tag that day, in which was his only day for the year where he didn’t collect 20+ touches. Anyone wanna bet on that happening again? I wouldn’t be.

Only 3 per cent of coaches are on the Bont-Train and personally, can you see him dropping under his average of 104? I certainly do not. Plus, he’s so much cheaper than many of the others here.

From round 6 last year, Bont averaged 115. That is elite. Add to that, he averaged 130 in his last six games. These numbers are nuts. He is not averaging under 104 this year.

Bont averaged 105 prior to last year and I don’t for one second want people to think that’s the bracket he is in now. He is a 110+ guy. Just look at how he ended the 2020 season. I know, with Treloar coming he could spend more time forward. I get that, but I don’t think it will matter a great deal. When he sits forward, he still scores.

He plays Collingwood (Friday), Eagles (Saturday) and North (Friday) int he opening three rounds meaning you get a free vice captain hit with him for two of those. Oh and did I mention Bont has a ceiling… remember when he scored 181 and 155 last year, imagine those as VC scores.

OINK! OINK! Ok… Who is brave? Who wants to run the gauntlet early here with a guy who usually smashes out big round one scores. In round one last year Rocky opened his account with 114 and do you remember 2019 when he scored 166 in the first round to have everyone trying to work out how to get the little pig into their teams. This could happen again!

Last year against North he smashed them for 153. When he played the Bombers… he scored 153. Those two teams right there, are Rocky’s first two opponents.

We all know what this man is capable of and the exciting ride he can produce. Lets not forget how this man ended the 2020 season averaging 131 in his last five and 145 in his last three. Smell that bacon?