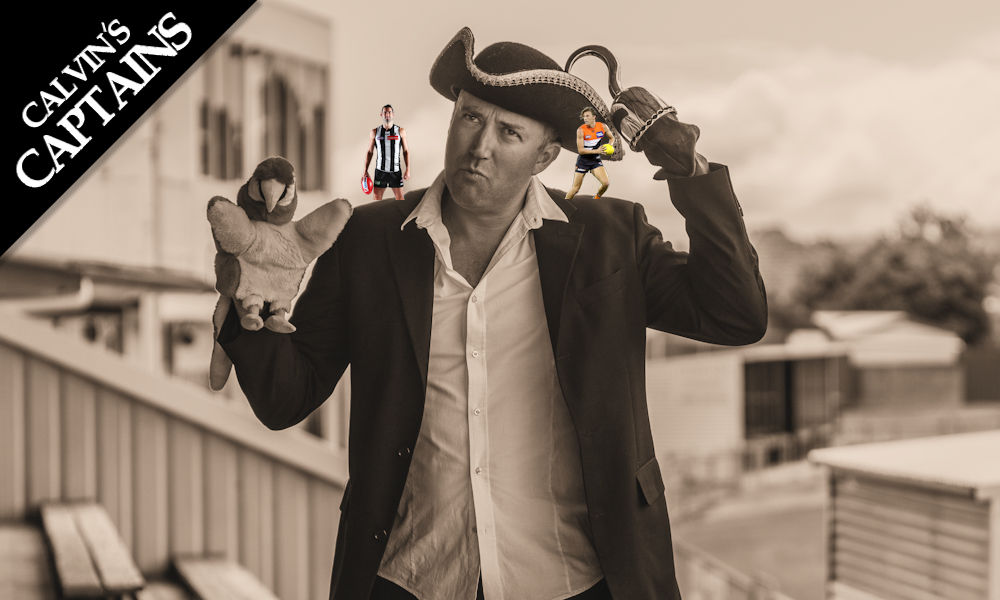 Here we go again and after nailing another 150 last week, it’s safe to say I’m up and about once again. It’s a little tricker this week with any of my top few capable of having a huge score this week.

Let’s have a Boags and chat #AFLFantasy. Oh and some captains as well. https://t.co/HQSqMFso2M

The Eagles at home are sensational and there is none better on his home turf than Andrew Gaff. He has scored 115 or more in four games there this year and meets the Doggies, a team he has scored 104, 92, 130 and 146 against in his last four.

Elliot Yeo has been a tackling machine and nailed a causal 15 last week. He has gone over 140 twice already at home this year and had 134 on the Dogs last time he played them.

It won’t matter, but the Dogs have only given up 3×110+ scores to midfielders since round 7, but I’m not fussed one bit and have both of these guys set in my top 10 this week.

Move over George Hewett because Sydney have found a man to relive him of his tagging duties in the name of Ryan Clarke. He was awesome on the weekend for the second time with the tagging role to hold Steele Sidebottom to just 48.

This week he’ll have his sights set on either Tim Kelly or Mitch Duncan.

Kelly had 98 and 82 when he played the Swans last, after not playing them at all in 2018. He has been in great form as has Mitch Duncan who is averaging 128 in his last three games. He scored 100 and 105 on the Swans last year and could be the man who gets clamped here.

Matt de Boer locked down Clayton Oliver last week to just 62. Brayden Fiorini owners be warned, it’s coming your way this week. Fiorini had 27 touches last week with 122pts and is he somehow avoids it, David Swallow might be the next in line. Either way, avoid these guys like the plague.

Mark Hutchings could run with Jack Macrae, but he only managed 22 disposals last week without any attention. Marcus Bontempelli or even Josh Dunkley could be targeted here.

Finally, just be mindful of James Harmes who occasionally gets a role to tag and might have to run with Rory Sloane in Darwin. Sloane hasn’t scored a ton on the Demons in his last three games and won’t again if Harmes stands near him.

CASH IN OFF THESE STATS

The work I do in here can be used for multiple things and if your not using them to help your Moneyball team then you are a fool. Look at the prize money on offer this weekend. IT’S BLOODY MASSIVE and why not use my hours and hours of research to good use. Sign up here!

GWS are against the Suns at home and this could be anything.

Lachie Whitfield copped a tag last week till half time (50pts) before Melbourne changed their plans that saw him finish the day on 123. He scored 120 on the Suns last year and loves playing at home where he has posted 190, 162 and 109 this year.

Last year against the Suns, Josh Kelly had a career-high 166 and on that day, seven other Giants hit triple figures. He had a top 5 score for the round last week with 135 and loves playing at home with scores of 120 and 100 already this year.

Since round 7, the Suns are giving up an average of 121pts to the three best opposition midfielders.

Keep in mind though, we were expect huge scores last week from Kelly (126) and Duncan (118) and although they were good, they could have gone much bigger.

He’s averaging 150 in his last three games and there is a very important conversation happening at the moment about awarding the man an official snout.

Brodie Grundy plays the Dockers this week, a team he scored 126 and 131 on last year. But this year it’s different because they have Rory Lobb. When Grundy rucked against Lobb last year when he was a Giant, Grundy scored 111 (in the Semi) and 127 in round two.

In recent weeks against Lobb, rucks have struggled a little with Stef Martin (63) and Bellchambers (64) under-performing but before that Reilly O’Brien (120) had his best score for the year and Tim English (86) was solid for his standards.

Firstly, both will be great.

Whitified has the higher ceiling to be 180+ and the better match up. However, he can be tagged. Suns haven’t really tagged at all this year though. Notice the weather above, Whitfield will need it dry (or close to) for his 12+ marks and the weather up there (as of Tuesday night) is still very 50/50. I have his range as 110 to 190.

Grundy is safer as he can never be tagged and will be 115 to 145 this week. He has form better than anyone at the moment and the weather won’t effect him at all. If anything, a little rain might help him. He has awesome runs on the board at the MCG and against the Dockers and Lobb.

THE DECISION (for now): At the end of the day, the decision is all yours. The weather will play big factor in this, which means I will tweet out (@CalvinDT) my final call on this Friday afternoon.

But for me, my job is to nail HIGH scores, not safe scores. So for his ceiling alone, Whitfield gets the tick from me this week, but between the two it’s so close.

Depending on your ranking or where you sit, you make the call. But for me… I have both in my shit team and will be going with Whitfield this week, the guy who I think can score the highest.

Dusty Martin v Kangaroos @ Marvel Stadium – 109 and 135 in his last two games means that Dusty is back. Scored just 48 on the Roos last year though thanks to a Jacobs tag. They don’t have anyone like him anymore.

Adam Treloar v Fremantle @ the MCG – Plays his favourite team who he has scored 112, 117, 127 and 127 on in his last four. Adams won’t return which is another reason to get behind him this week

Steele Sidebottom v Fremantle @ the MCG – Tagged to just 48 last week but there are no tags here. Scored 123, 131 and 127 in his last few on the Dockers. Smashing numbers.

Scott Pendlebury v Fremantle @ the MCG – 123 last week and has hit triple figures in five of his last six on the Dockers.

Patrick Dangerfield v Sydney @ GMHBA Stadium – At least we can say is, “he’ll be fresh”. Only managed 76 and 70 last year on the Swans though. Will be much better than that, but who knows.

Lachie Neale v Hawthorn @ the GABBA – Only averaging 95 in his last three games and had 105 on the Hawks last year as a Docker.

Matt Crouch v Melbourne @ TIO Stadium (Darwin) – Good signs for the Crows as Melbourne have given up the second most 100+ scores (15) in the last three weeks. Matt had 123 and 103 on them last year. But how will he return?

Travis Boak v St Kilda @ AAJS (Shanghai) – 0x100+ in his last three against the Saints but will be better than that.

Tom Rockliff v St Kilda @ AAJS (Shanghai) – Just can’t consider him after that scare and the possibility that he mightn’t even play.

Zach Merrett v Carlton @ the MCG – Set up perfect for him here. Carlton have given up 16 tons in recent weeks and 6×120+ scores, but surprisingly, Carlton are his worst team to score on with just 1×100+ score on them over his career seven games, and just 81 last year.

Patrick Cripps v Essendon @ the MCG – He’s a one man show at the moment and struggling with just 88 last week. Scored 93 and 95 on the Bombers in his last two games.