Hartlett was looking great before his ACL injury in 2018, he is underpriced, but is he worth the risk? 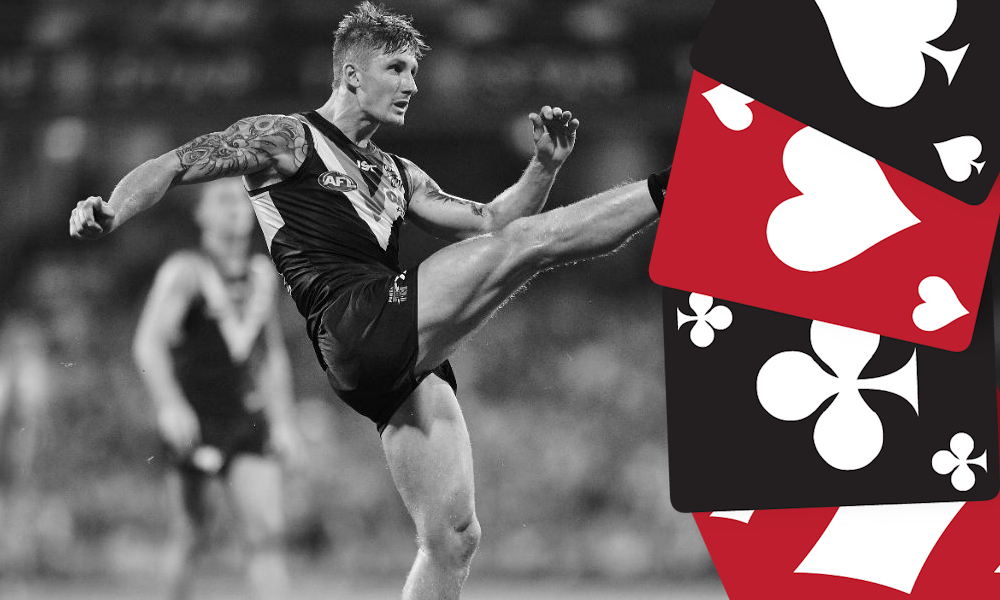 Value. Hartlett provides a great deal of value in the back line for us. Given he only played 5 games last season before tearing his ACL he has been discounted to be priced 13 points below his average and he was looking really good to that point. His 5 games netted him a 92, 77, 98, 65 and 101. It was his best average for three years and he didn’t look like slowing down. If he can return to this level of scoring this season then he can be a huge bargain that will rise in value and get you some handy points along the way.

With Pittard leaving the Power this season the quarterback type role is Hartletts. He was playing the role during the 5 games he was out there for last season as Pittard wasn’t in the team. He is a good user of the footy and Port will want the footy in his hands coming out of the back line. On top of that he prefers to kick the footy, he averages 20 touches a game and of those 20 he had 14 kicks during 2018 whereas prior to that he was having 11.5 kicks. So his game has become much more fantasy friendly.

The elephant in the room is that ACL. He has been out for the last year and it is often said that it takes two years to get over an ACL, the first one after the surgery and then the second year playing takes a while to ramp up and regain confidence. This is the massive concern that we have with selecting Hamish this season. At the start of last season he had a heap of confidence and was as fit as he has ever been, how much of that has he lost now after spending last season out of the game?

Whilst he did get off to a great start last season before his injury his two previous seasons weren’t as great. He averaged 78 and then 70 respectively which when you look at where he is priced this year, 73.6, it would suggest that he is priced about right. It all comes down to the role that he has. We don’t know where Burton is going to play and if he is in that back 6 that may curtail Hartlett’s possessions.

The average in those first 5 games could be over inflated and he may have actually settled back to that mid 70’s average. We have seen on many occasions that a player can get on a hot streak but then settle back into that same average they had in previous seasons. We just don’t have the sample size from season 2018 to make a definitive decision on the validity of this average.

Overall, there are just an absolute heap of unknowns about how Hartlett will go this season. This to me is one of the key reasons not to select him in your starting squad.

QUEEN – I think that Hartlett provides some great value down back this season and should be seriously considered. If it wasn’t for his ACL then I would say he was a lock, but it just gives me that lingering doubt about his scoring potential. He is one player that we need to keep a tight watch on in the pre-season to see how his confidence is and what his role is, if he comes through well then he could pay off big at that price. At this stage he is on the watch list for me but not in the side. I would love to select him but I just don’t think he is over the line yet.