Nic takes a look at the BBL Fantasy bowlers in a short-sharp Deck of DT style article. 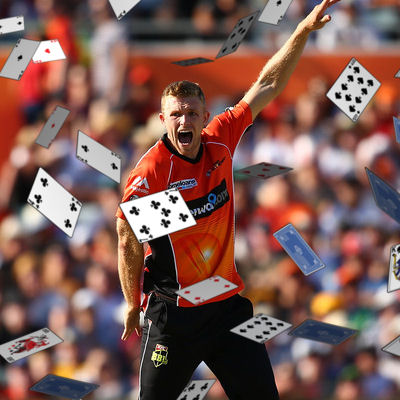 For the sake of simplicity, players in the test squad will not be looked at.

Abbott had a brilliant tournament and has emerged as a big wicket taker at this level, but I just can’t see him reproducing to a level that justifies that price tag.

Expect Steketee (say that 10 times real fast) to lead the bowling attack for the Heat again this summer and should be a decent option, but could be hit or miss at times.

Johnson terrified a lot of batsmen last year, but the issue will be whether he can produce good Fantasy numbers. His economy rate will be one worth paying attention to.

Willey should open the batting for the Scorchers and is as good as any all-rounder in the tournament. He should sit pretty comfortably in your team.

The Stars have too many bowling options to be turning to Hilfenhaus at the moment, especially with John Hastings back from injury.

Botha is a sneaky option, but don’t expect anything from him with the bat. He should perform pretty consistently with the ball, assuming Henriques goes to him and not himself like he did last season.

Richardson has a lot of pressure on him to perform for the Scorchers with Behrendorff and Coulter-Nile both injured. He’ll certainly be given a lot of opportunities in this tournament.

Khan is still a teenager, but has quickly emerged as one of the best limited overs bowlers in the world. He could do some serious damage on Adelaide Oval this summer.

Laughlin is one of the best T20-specific bowlers Australia has produced in recent years and he should control the middle overs for the Strikers again this summer.

Richardson made the move to join the Melbourne Renegades this tournament and at his best can be an international quality bowler. He’s priced well and should be the number one strike bowler for his side.

A lot of these strike bowlers are very similar in terms of output and Boland really isn’t much different to many of the guys above on this list. He’ll take the new ball for the Stars, but I feel there are better options in this price range.

O’Keeffe is a very economical bowler at T20 level, but won’t really produce much beyond that. Batting at nine won’t give him much of a chance for late-order hitting either.

Cutting’s price tag is very tempting given the reputation he’s built as a damaging bowler who can score quick runs at the back end of an innings. His bowling last season was below average though and the Heat will be expecting a lot more from him.

The Duke missed the tournament last year, but is one of the best short form bowlers in the country. Expect him to provide great value for money at this price.

Faulkner has had a shocking 12 months, but we all know how talented he is at his best. He’ll bounce back in this tournament and lead the Stars’ bowling attack.

The Hobart Hurricanes have been very impressed with what they’ve seen from the Barbados-born all-rounder so far and he could provide great value at this price. He’ll probably bat a little too deep to get pinch-hitting points.

There are better options than Siddle whose bowling style may struggle in the T20 format. Keep an eye on him, but don’t expect too much.

The issue with Henriques is his lack of desire as captain to bowl himself and this hurts his value. Expect him to bat at five for the Sixers.

McKay was once the premiere bowler in Australian T20 cricket, but he got battered in BBL06. At this price, he’s absolutely worth a bench spot.

Paris will take the brunt of the workload left by Coulter-Nile and Behrendorff and is good enough to be a bowler in your starting line-up. He’ll be up there in terms of the best value players in the tournament.

Sandhu was dropped multiple times by the Thunder last season, but has performed reasonably well so far in practice matches. Patrick Cummins not being around helps him.