Sunday extended bench selections have been made! Next update, late changes Pies vs Dogs ~7:20pm tonight.

The final teams are in for #AFLPiesDogs.

As the only, and literally only ruck rookie available, looks like we are stuck with Braydon Preus (Ruck $150,000) who will give support for Goldi at North. He scored a respectable 69 during JLT, where he was the solo ruck. He also scored 76 in the same game as Goldi, which could give us some hope, but then followed up with a 35 which honestly is where Id expect a rookie back up ruck to lie. But its not like we have much of a choice.

Another export defender like Marchbank who looks to have a good role at their new club, Curtly Hampton (Def $204,000) had a very strong JLT series with 60, 89, 80 and is a popular choice. He has made the sunday extended bench selections peeps so no more concern (he was always going to be picked).

Final teams are in for #AFLBluesTigers

Remaining weekend teamsheets are in! Due to massive on site traffic unlikely to finish all my notes until after the partial lockout. (People reading my article, honestly, how dare you all :P). Goodluck for all of you madly updating your teams before partial lockout!

I also forgot to mention I have a RDT league to join as well if you want. First in best dressed.
RDT league code: 149131

Remaining R1 teams named soon on club sites; https://t.co/IBZE862aY1. Up to 19 more players in line for AFL debuts. Up to 27 with new clubs.

Special update.
Rookie upgrade deadline has occurred at 2pm today. The big one everyone has been looking for is Jake Barrett (Mid $150,000 ) so you can feel pretty safe leaving him in your mids for now, but do check team sheets to confirm.
Another to keep on your radar is Joel Smith (Def $150,000) for the dees. He scored 59 and 43 for his 2 JLT games.

Sydney Swans have upgraded Shaun Edwards from the rookie list to replace Gary Rohan, who was already on the long-term injury list.

Melbourne has upgraded Joel Smith from the rookie list as the replacement for Mitch King, who was already on the long-term injury list.

Brisbane Lions have placed Sam Skinner on the long-term injury list and upgraded Jake Barrett from the rookie list as his replacement.

Hawthorn has placed Jon Ceglar on the long-term injury list, with no replacement named from the rookie list at this time.

Richmond has placed Jack Graham on the long-term injury list, with no replacement named from the rookie list at this time.

Teamsheets are back for 2017 from ~6:15pm tonight. Welcome back everyone! And we start with our perennial opening match of Blues vs Tigers. This is a partial lockout game in AFL Fantasy, and you will lose all chance to pick Blues or Tigers players for your starting squad Thursday 7:20pm EST, so make sure you have the players you want. You will only have a small opening to see which players are selected for the rest of the round from 6:15pm tomorrow before the first game starts, so make sure you check the weekends teamsheets!
Partial lockout means we do technically have a captain loophole opportunity, and I would still use the opportunity to choose a tiger or blues player as my VC. You do have to choose a non playing player to use the loophole which I don’t like as a strategy. But then again if your loophole VC somehow scores 150+ I would consider choosing say a R4 who isn’t playing, which many of us might be doing anyway due to lack of ruck rookie stocks. Dunno what a Captain loophole is? Refer to CALVINS CAPTAINS.
Already talk that pricey rookie Sam Petrevski-Seton (Mid $240,000) may debut for the blues. Some info about him here. Jason Castagna (Def $293,000) has been raised from the rookie list for Tiges, but even if named would be too pricey for most to choose.
Another handy little note, the remaining AFL teams have until Thursday 2pm to upgrade rookies, which may give us an indication of which rookies might get a game, and giving us a bit more time to play around with teams.

Lastly I have made a bit of a Fantasy league for fun. Feel free to join Invitation Code: U3JJ2RPA. First in best dressed.

Richmond has upgraded Jason Castagna from the rookie list under the rules relating to a long-term injury (replacing Chris Yarran).

GWS Giants have placed Tom Downie on the long-term injury list and upgraded Tendai Mzungu from the rookie list as his replacement.

A finger injury has ruled ruckman Darcy Cameron out for selection for Round 1. Details here: https://t.co/g5ctlSr7Xx pic.twitter.com/zDu9eAOj7Y

Liam Pickett (Fwd/Mid $150,000) showed enough with his JLT games scoring 27, 26 with low %TOG and following up with an impressive 73. But its his DPP status of fwd/mid and price that makes me most likely to pick him, especially since mid rookies are looking slim pickings or should I say slim “Picketts” this year.

Will Hoskin-Elliott (Fwd $230,000) previously from GWS, and looking like he is good to go at his new club at the pies, Fantasy scores of 70, 45 and 68 over the JLT, you can see why WHE is a popular pick. He does come with a hefty pricetag for a potential cashcow so you will want him to perform.

Got a bit of a mancrush on this mature age rookie, Brett Eddy (Fwd $150,000) who is the SANFL goalkicking machine. Saw his first two JLT games where he scored quite low, but couldnt kick straight to save his life. I thought to myself, I reckon this guy could beast and snuck him in my forward bench and hoped no one else was looking. And then in his third JLT game he kicked 5. As a key forward his scores will depend on him kicking goals, so more ideal as a cashcow on the pine. But he has a powerful forward presence and could be the major Goal kicker for port this year. 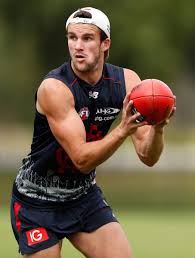 Joel Smith (Def $150,000) could be a sneaky little defender rookie option only being upgraded this week to line up for the dees. He comes in with Colin Garland having a season ending knee injury, so his Job security seems pretty good. Being a key position defender would likely keep his scoring down. With scores of 43 and 59 from the JLT he could have the portential to be a slow burn rookie option.

With JLT scores of 86, 46, 63, and a cheap price tag Jake Barrett (Mid $150,000) who is only just elevated from the rookie list this week is a popular choice in the mids. Indeed due to the lack of cheap mid options hes almost the only choice. Jump on him!

Jaeger O’Meara (Mid $364,000) looked great before he was befelled by injury at the suns. He looked great over the JLT series with his new team at the hawks, scoring 76, 98, and 47 with limited TOG. They got him to play in the guts. I cant see much wrong with choosing this gun mid pricer. Unless you consider him a chance to break down again.