Does Touk get in the midfield rotations again at the Suns and be a bargain forward? 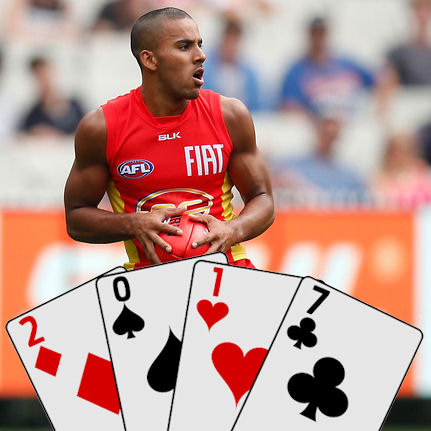 One of few players to wear his socks up, Gold Coast rising star Touk Miller caught our attention towards the back end of last year when he posted scores of 135, 111, 139 and 105. Having played his junior footy at Maribyrnong Park in Victoria, Touk made his AFL debut in 2015, going on to play all 22 games that year and finish with a Fantasy average of 70. He backed this up with an average of 81 in 2016. At 178cm, Miller isn’t blessed with great height but he is strongly built (81kg), wins his fair share of the contested ball, makes good decisions with ball in hand and is able to hit targets by hand and foot. The former pick 29 is also a tackling machine, managing hauls of 10, 11 and 9 during last season.

Miller was able to claim a full-time midfield role in the last six weeks of the year with Rodney Eade later proceeding to declare that Touk would feature in the midfield come round one. Yes, Rodney, we will be quoting you on that one! But personally, I question whether he will play 100% in the midfield given new additions, Barlow, Brodie, Lyons, Hanley, Ainsworth, Bowes and to a slightly lesser extend Scrimshaw are all able to rotate through. However expect to see him spend more time in the centre then what we’ve seen over the coarse of his first two seasons. Moving away from the high half forward role can only be a good thing for his Fantasy output.

Miller is priced at $493,000 in 2017, making him significantly cheaper than prominent premium forwards Jack Macrae, Luke Dahlhaus and Toby Greene. At the time of writing, Miller is owned by 6.2% of the 41,000 strong competition. This figure surprises me a little, considering how many coaches pencilled him in at the end of last season. Perhaps the expected rise of Isaac Heeney has led coaches to select him as their mid-priced forward over Miller. I’m not as keen on Heeney as many others seem to be and believe Miller will score just as well, if not better than Heeney this year. Both are expected to lift their outputs with added midfield minutes.

Thanks to David Koch and the Port Adelaide footy club, Gold Coast and the Power will battle it out for premiership points in China. Obviously they weren’t really thinking about how it would affect Fantasy coaches when it was scheduled for round eight – meaning the two participating clubs take their byes the following week. I personally am a bit undecided as to what sort of tactic I will use when it comes to picking Power and Suns players. They may need to be covered or traded in order to field 22 players but will be a real wildcard during the normal bye rounds. It would make sense if you just pick the player if you want them without going crazy.

Queen– Fresh off signing a new two-year contract extension with on the Gold Coast, a queen seems like the appropriate rating to hand Miller. Although he has the potential to become a Fantasy gun, as he has shown since his debut, Miller is yet to really break out. Many guns have broken out in their third years in the system, so here’s hoping 2017 proves to be year of the Touk. I can see him lifting his average to around 92.