After averaging 102 in his last six games and averaging 111 in 2015, surely Luke Hodge is a ‘lock’ as a defender priced at an average of just 87? Join Calvin as he takes a look. 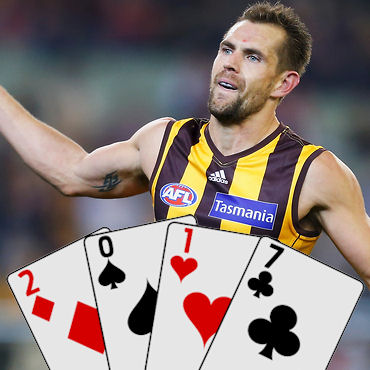 It’s one of the greatest days on the calendar and therefore I thought we’d need to cover once of the nicest/best blokes in the game. Luke Hodge.

Now, those anti-Hawks people out there…. Relax. Hodgey is a true jet and here at DT Talk, he has been of the best blokes to us over our time and his dreamy eyes get you at ‘hello’.

Why should you pick him?

He’s a defender, and Luke Hodge will be one of the best defenders you’ll have in your team by the end of the year. So why not start with him at a bargain price?

With Sam Mitchell and Jordan Lewis departing, I can only see this benefiting Hodgey. Yes, Jaeger and Tom have arrived, but they are kids.

Mitchell and Lewis demanded the ball and the midfield time they deserved. Hodgey will need to help out more than ever. He’ll need to have stints in the midfield as the bigger-bodied, experienced player. As well as, floating across half-back demanding the ball at every opportunity.

The fact it, if Hodgey is open, Jaeger and Tom are finding him.

Age. Durability. The two main reasons why people will avoid Hodgey this year, and they are both very valid.

Despite having skin like a model, Hodgey will turn 33 this year. This crosses him off the list of many experienced coaches. A role change down back will lengthy Hodgey’s career though and as we know, there are a lot of points to be had in that back half.

He only managed 13 games last year, but with that said, he did play all games from round 14 onwards.

The big one though is… he hasn’t played a full season since 2007 and over the last five years, he has only played in 67% of home and away games.

That’s why he isn’t a ‘set and forget’ defender in your team. He won’t play all 22 games this year and he will cause you unwanted stress every Thursday night.

KING– I’d love to say ACE (as he has averaged 111 before) but the man can wear a crown.

He could potentially be a king in your defence and with so many great options down back this year, our strategy will need to be reassessed compared to what many coaches rolled with last year.

Cheap defenders were the play by many coaches like myself but now we have Taylor Adams, Montagna, Docherty, Simpson, Shaw, Laird, Boyd and Johannisen who all have the ability to average 100+ and maybe even our very own, Luke Hodge.