There were plenty of rookie winners in Round 5 and a few losers too so which ‘juniors’ are amongst the next wave of must haves? Don’t miss what Jeppa has to say about those that matter ahead of another all-important week of trading. 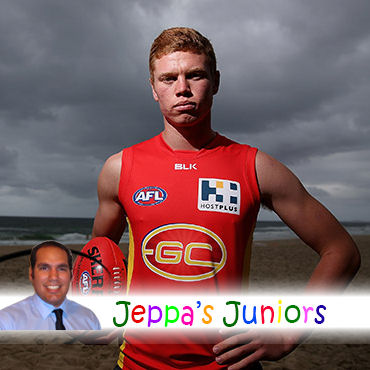 The rookie news was mixed this week but overall there aint too many dilemmas with popular cashcows. The only issue we have is picking which ‘juniors’ to trade out.

Thankfully, quality rooks are performing in the reserves and the timing is near perfect. The temptation of an expensive Petracca who can score a ton or a cheap Blakely that will provide the earnings are at the top of the must have list. 2-metre Peter and Darcy Tucker aren’t that far behind.

With so much young quality available, my trade strategy in Fantasy will likely involve a double downgrade this week.

Last week I stressed that Josh Wagner (Def. $213,000, -28 be AF. $195,400, -73 be DT) should be your number one rookie target and he didn’t disappoint. Against the Tigers, the left footer never looked rushed with the ball in hand and he finished with 19 possessions and 83 very handy Fantasy points. Off half back, Wagner is an asset for the Melbourne Football Club and with breakevens of -10 in Fantasy and -73 in Dreamteam, non-owners could still look to bring him in. Start him on your field.

Praise from Ken Hinkley post match now makes Darcy Byrne-Jones (Def. $213,000, -25 be AF. $196,600, -58 be DT) Fantasy and Dreamteam relevant (source). I wasn’t convinced after his first two games but to be one of the Power’s best players in just his third AFL match eliminates job security issues in the short term. Byrne-Jones was able to score 83 Fantasy points against the Cats with little help from senior teammates and I think scores in the 70’s from here on in is achievable. If a couple cheapies aren’t named to play as anticipated then I’ll look at DBJ.

Please note that if I haven’t mentioned a rookie priced player above, it means they’re not relevant. Remember rooks are classified as players under $250,000 in Fantasy and/or Dreamteam.

Freo’s form slump will see Hayden Crozier (Fwd. $239,000, 25 be AF. $242,400, 21 be DT) become a regular in their senior side. The crafty forward has been starved of opportunities to date but the Dockers need to turn to their youth and Crozier’s got a lot to offer. Against the Blues, I liked his work rate and he finished with 11 possessions, 2 marks, 5 tackles, 2 goals and 71 Fantasy points. Crozier will likely average between 65 and 70 Fantasy points this season and he’s still cheap enough for potential owners to gain some value. With all that said, you’re better off picking Petracca for the points or 2-metre Peter for the cash injection. A decent option nonetheless.

Last week I warned you about picking Tom Lee (Def. $181,000, -10 be AF. $128,200, -65 be DT). Jeremy Cameron kicked 4 goals on him in a quarter and a half and he was subsequently moved to Rory Lobb / Jon Patton. Lee was absolutely lost in the pressure moments and he scored a mediocre 51 Fantasy points. His job security is shaky and I wouldn’t be surprised if Hugh Goddard or Luke Delaney replaced him for Round 6. Avoid!

A breakout game from Peter Wright (Fwd. $179,000, -24 be AF. $193,200 DT) has me reconsidering the Fantasy rule of thumb ‘avoid young key forwards’. Against one of the best defensive teams in the comp, 2-metre Peter had an impressive 12 kicks, 5 handballs, 8 marks, 4 hitouts, 2 tackles, 3 goals and 105 Fantasy points. It’s highly unlikely that this sort of output will continue but if he has turned the corner then 65 each round is not out of the question. The problem is trading Menadue to Wright for example will only pocket you $64,000. Nevertheless, you’d be silly not to consider Wright in Fantasy this week given his likely earnings over the next month.

Josh Smith (Mid. $153,000, -20 be AF. $105,800 DT) benefited greatly from his teammates onslaught of Essendon. Playing as an outside midfielder, Smith enjoyed plenty of ‘easy’ ball and he finished with 23 possessions, 3 marks, 4 tackles, 1 goal and 89 Fantasy points. He won’t go as well against the Eagles on Sunday and his job security is far from assured with Collingwood’s midfield depth. Cheap mids aren’t exactly falling from the sky so some may opt for Smith as a short-term option. A risky pick!

Darcy Tucker (Def. $170,000, 9 be AF. $121,300 DT) looms as a solid option. The first year, running defender is a confident young fella and there’s no doubt his improvement will be rapid this season. On debut against the Blues, his stat line read 6 kicks, 10 handballs, 3 marks, 3 tackles and 60 Fantasy points. With the likelihood of the Crows pantsing Freo this Saturday, maybe play it safe and start Tucker on your bench for Round 6. Tucker’s teammate Brady Grey (Mid. $256,000, 24 be AF. $226,100 DT) was workmanlike with 77 Fantasy points. We all know the importance of a +4, so if a player like Grey can lay 10 tackles in a match then he has to be considered. On the flip side, Grey is quite handball happy and he had 13 of them from 16 possessions against Carlton. If he has another 75+ Fantasy game this week then I’ll consider him in Dreamteam for Round 7. He’s too expensive for Fantasy.

Connor Blakely (Mid. $137,000, 26 be AF. $157,700 DT) is a likely replacement for Nat Fyfe. The inside midfielder had 29 possessions in the WAFL in his first game back from a toe injury and the Freo hierarchy have always rated him highly. Cheap in Fantasy, Blakely will be a popular trade in option this week if named so make sure he’s on your radar. Cheap as chips and my favourite option.

Christian Petracca’s (Fwd/Mid. $238,000, 45 be AF. $128,200 DT) VFL form warrants selection and this is the round ‘truck’ will make his long awaited AFL debut. Petracca is that good that you could bring him straight into your Dreamteam and start him on your field and he’s definitely worth the extra coin in Fantasy. He’ll average 75 plus so find a way to get him in your team.

Rhys Mathieson (Mid. $158,000, 30 be AF. $121,300 DT) has recovered from his broken cheekbone and the timing is almost perfect. The fearless midfielder had 32 possessions in the NEAFL on the weekend and was one of the best players for his team. After what Ben Keays produced in the reserves without reward, I doubt Mathieson will go straight into the Lions senior side however, he seems to be a favourite at Brisbane.