Another week of footy action sees many ‘juniors’ worthy of a mention. In this article, Jeppa takes a look at the best trade down options available this week as well as which players to start on your field. Enjoy. 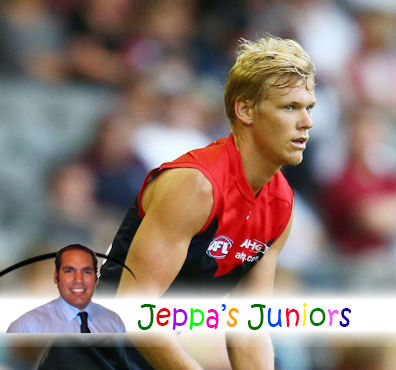 I’m back from holidays and gee whiz we’ve got a lot to talk about!

Round 4 was another tough week for Fantasy coaches after plenty of under performing premiums (Titchell, Dusty, Houli, Ablett) and midpricers (S.Gray, Lonergan, Sheridan). The rooks weren’t that much better with just one hitting the ton and only three cheapies scoring in the 90’s. Patience is going to be a virtue this season!

Trading this week will vary from team to team but ultimately you should be eyeing off a cheap premo like Dahlhaus, Pendlebury, Hannebery and Jordan Lewis. Picking an underpriced jet now we’ll give you a leg up early.

Young star, Callum Mills (Mid. $274,000, 22 be AF. $264,500, 23 be DT) rewarded his owners that kept the faith with a super handy 92 Fantasy points from 23 touches, 8 marks and 3 tackles. He’ll score reasonably well against West Coast this week and I’d start him on your field. Note that Mills is a certainty for Fantasy dual position defender/mid status come Round 6.

We don’t need to worry too much about our rooks hitting those mediocre scores as they’re still earning us money.

From the list above, I’d still start Parish and Adams!

Please note that if I haven’t mentioned a rookie priced player above, it means they’re not relevant. Remember rooks are classified as players under $250,000 in Fantasy and/or Dreamteam.

Josh Wagner (Def. $166,000, -26 be AF. $125,300, -65 be DT) was superb against Collingwood and he should be your number one downgrade target this week in both Fantasy and Dreamteam. The mature age defender reads the play exceptionally well and makes excellent decisions when he has the ball in hand. Wagner finished last weekend with 13 kicks, 11 handballs, 6 marks, 5 tackles, 98 Fantasy points and was one of the Dees best players on the day. I haven’t forgotten about his 36 Fantasy points in Round 3 but confidence is a beautiful thing and now that Wagner knows that he belongs at the highest level, I’m expecting around 70 Fantasy points from him each week. Back him in.

In only his second AFL match, Darcy Byrne-Jones (Def. $169,000, -20 be AF. $128,200, -61 be DT) battled hard for Port Adelaide and I thought he was far from disgraced unlike some of his teammates. Playing as a running defender, DBJ had the ball 21 times (5 rebounds from defensive 50), 5 marks, 3 tackles, 1 goal and a notable 84 Fantasy points. With Jarman Impey a chance to return this week, Byrne-Jones could be squeezed out as both play similar roles. Hinkley isn’t one to drop a player performing though so DBJ could be a great short-term cashcow. Risky.

After being named as an emergency for Rounds 1, 2 and 3, Tom Lee (Def. $152,000, -16 be AF. $128,200 DT) finally got named to play his first senior game since mid 2014. The forward turned defender was excellent from an AFL Fantasy point of view, scoring 85 but he made quite a few critical mistakes in the match that the Saints coaching staff would not be happy with. Clangers and poor disposal efficiency threaten Lee’s job security and he’s a risky pick as a result. I’d much rather Wagner.

Jayden Hunt (Fwd. $136,000, 6 be AF. $128,200 DT) is an impact player for Melbourne capable of being reasonable back up in Fantasy. On debut against the Pies, Hunt had 7 kicks, 6 handballs, 5 marks, 2 tackles and 50 Fantasy points. His role won’t see him be a big ball winner but with a little more confidence, scores in the 60’s are achievable. It’s probably wise to wait and see what he produces against the Tigers on Sunday before trading him.

Fresh faces coming through the ranks are limited at the minute. Rupert Wills (Mid. $125,000, 23 be AF. $121,300 DT) is one that could debut this week, on ANZAC Day no less! For two consecutive weeks Wills has been a prolific ball winner in the VFL averaging 32 possessions, 6 marks, 6.5 tackles and a whopping 130 Fantasy points. Collingwood have to swing the axe in my opinion and a workmanlike player like Wills who is keen to impress is exactly what they need. Hopefully Buckley has the balls to pick him but with the game being on Monday, we may not know if Wills has made the 22 until after lockout. Watch this space regardless.

The previously mentioned Darcy Tucker (Def. $158,000, 29 be AF. $121,300 DT) is a greater chance to play this week with the Dockers underperforming. He’s a good user of the ball and can accumulate possessions. Against Carlton, Tucker would do well but with a long-term approach, I like Wagner better.

There you have it. Feel free to ask me a question below and don’t forget to add me on Twitter @JeppaDT for all things Fantasy and more. Happy trading!