The reigning Brownlow medallist has plenty to offer on the AFL Fantasy front and Jeppa dissects all the pros and cons. An intriguing pick this season. 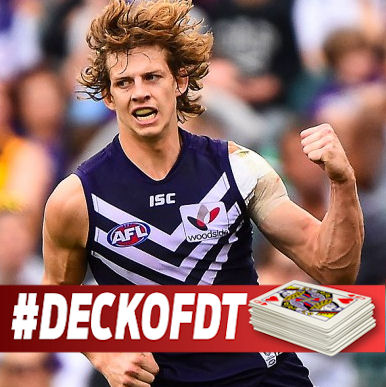 Because he’s the reigning Brownlow medallist and the second best player in the AFL (don’t deny it). Fyfe averaged an impressive 29 possessions, 4 marks, 4 tackles, 1 goal and 105 Fantasy points per game last season and many forget he’s still just 24 years of age! Fyfe did play a handful of games under an injury cloud last year so assuming he sees out the season without any major issue then he should improve on his 2015 output.

Consistency is key. Last year Fyfe hit the Fantasy ton 72% of the time during the home and away season (The best was Pendles with a 73% strike rate) and he scored below 90 just twice! The yo-yo scores of someone like Sidebottom or Ebert will have you on edge for those all-important head to head league battles so rest assured when picking the 190cm, 85 kilo midfielder. He’s a seriously safe bet.

Less rotations in season 2016 will see Fyfe ‘resting’ up forward a little more. Ross Lyon was all tongue and cheek last week when he said that Fyfe would be used 50/50 through the midfield and forward line (source)… don’t take those comments seriously. The additional time that he does spend up forward through lesser rotations does however, give a gun like Fyfe a better chance to hit the scoreboard, increasing his likely Fantasy output.

The diehards will know about Freo’s great run early this season. The Dogs, Suns, Eagles, Roos and Blues had no answers for Fyfe in 2015 thus those that start with him should see a great return for at least the first five rounds. Come Fantasy Finals at the end of the year, Fyfe’s scores all stack up very well. In Round 20 he faces West Coast (last score of 108). Round 21 it’s Adelaide (150), Round 22 is GWS (109) and Round 23 versus the Dogs (109).

The area of Fyfe’s game that needs plenty of improvement is his goal kicking. Dockers fans will remember the 2013 grand final where he missed a couple of set shots and he really hasn’t improved since. A plus 6 instead of a mere plus 1 makes a world of difference.

Fyfe has never played a full 22 game season. Whether it was due to ill-discipline (suspension) or injury, Nat has missed numerous games in his 6 years to date. Odds are that this will happen again in 2016 especially with his recently reported back troubles. With two trades per week in Fantasy, this risk is mitigated but burning a trade in Dreamteam will leave a bitter taste.

KING – Fyfe’s determination and competitive nature makes him elite talent on the footy field. He’s hitting his footy prime and I believe he’ll be knocking on the door of the top 8 averaging midfielders this season. Fyfe will adapt seamlessly to fewer rotations and he’s likely to impact the scoresheet a little more, boosting his AFL Fantasy scores. He is unlikely to play 22 games this season but Freo’s early draw is too good to ignore. I’m on the fence at this stage but if he moves freely during the NAB Challenge then I’ll probably pick him ahead of Steven, Lewis and/or Hannebery.

FOLLOW ME ON TWITTER: @JeppaDT for all thing AFL Fantasy (and more). Got something to say about the deck? Use the hashtag… #DeckofDT.