The Stats That Matter – Part One

We all have opinions when it comes to fantasy footy, but numbers don’t lie. Join mbrucie for a look at the Crows to the Giants in a special stats filled article. 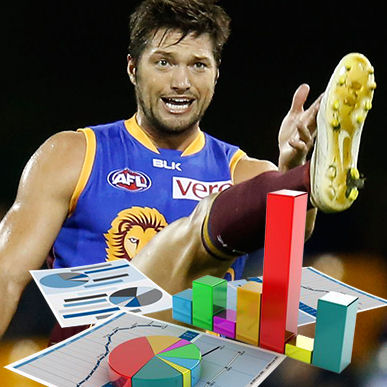 I love a good number. After all, so much of this game that we love is based on statistics; possessions, averages, breakevens, ceiling, vest affected games, goals, the list goes on. We will all have opinions, but the numbers never change, so I will try my best to keep this as unbiased as possible, and let the facts do the talking. The aim of this two-part series is to provide a stat or two from each club which are designed to make you consider someone else, maybe reconsider your current selection, or even just to reaffirm your current thinking. Anyway, let’s get cracking with some numbers!

We’ll kick things off with the Crows and one of the more obscure stats I have come across and a stat which potential owners of Brodie Smith must be aware of. Yes, he was affected by two concussions throughout the 2015 season, but Smith is a rollercoaster, and a frustrating one at that, best epitomised by the six week period, between R15 and R20. Unbelievably, from his twelve halves in this period, Smith registered less than 20 points in five of those halves, a run which included first half scores of 12, 16, 17 and 19 and a second half score of 16. Although obvious upside exists, I think one really needs to question if they can maintain sanity with a guy capable of being so consistently inconsistent.

Although a very popular selection throughout the preseason, I think are lot of us are forgetting, or maybe underestimating just how good Stefan Martin is. Since R12 of 2014, Martin has averaged 113.34 in his 32 games in that period, incredibly only dropping below 90 once (87), against Collingwood at the start of 2015. To put this in to perspective, fellow uber premium ruckman, Todd Goldstein has fallen under that mark eight times in that period. In the nine games in which Martin played without Leuenberger in the team last year (including the game against Geelong when Leuy went down early), he averaged a whopping 127.55, never going below 107 and pumping out monster scores of 134, 138, 124, 151, 107 and 152 to round out the season. Captaincy material, dare I say.

Scraping the barrel for a good stat on the Blues here, but Brendan Bolton should be a breath of fresh air for the senior players, especially Marc Murphy, whose Fantasy numbers took a significant hit under the Malthouse reign. In the past five seasons, Murphy has played 98 games; 49 under Malthouse, 49 under another coach. Under Malthouse, Murphy went at 90.27. Under other coaches, Murphy went at 106.71, including 31 (63%) tons in the 49 games. Ceiling will never be an issue for Murphy, converting 25 of those 31 tons in to scores of 114+. With Bolton coming from Hawthorn’s high possession, fantasy friendly style of game, you could do far worse than to pick up Murphy as an early point of difference.

I wasn’t going to get through an article without mentioning my boy Tay Tay. This piece will however be completely unbiased, so I won’t mention the fact that Taylor Adams’ average bumps up to 105 with the removal of his injury affected match against Carlton, or that he was plagued by toe problems and a variety of roles early in the season which inhibited his scoring, or that he has recently been added to the Collingwood leadership group, or that Treloar is struggling with OP and the likes of Pendles, Swan and Sidebottom are rumoured to be spending less time in the midfield this year. However, I will mention that when Adams goes big, he goes big! From his 15 career tons (keep in mind, he has only just broken in to premium territory), his average from these 15 games is 119.8, while 60% of those tons have been converted to scores of over 120. Go without him at your peril.

Priced at $226k in AFL Fantasy and $275k in Real Dream Team, Bombers’ top up player, Jonathan Simpkin would have to be one of my first picked players this year. After debuting in 2012, Simpkin was unable to cement a regular spot in the star studded Hawks’ midfield, and when he did, he was given the vest in 16 of his 33 games to date. But, this kid can play. From his 17 full games at the elite level, Simpkin has gone at a career average of 82.18, including three scores of 106+, and going over 84 in 53% of those games. Let’s not forget that he did this largely playing a high half-forward role, imagine what he could do if let loose to play as a pure ball-winning midfielder. Potential F6/F7 for the year in the limited trades formats, you heard it here first.

Much has been made of Fremantle’s fantasy friendly draw to kick off the 2016 season, but just what effect, if any, will this have on some of their star players? In the first seven rounds, the Dockers face games against the Bulldogs, Gold Coast, West Coast, North, Carlton, Adelaide and GWS. Against these teams last year, Nat Fyfe averaged 106.57, slightly up on his season average, but with an interrupted preseason, these numbers do not immediately scream “pick me” outside of SC. Although a variety of roles is probably more to blame, Michael Barlow went at 79.22 against these sides in 2015, well down on his seasonal average, while fellow midfielder, Lachie Neale appears to be the biggest beneficiary of the Dockers’ start to the season. He went at 113.44 in his nine games against the sides he faces in the first seven weeks, including monster scores of 162 (West Coast), 151 (North) and 147 (GWS). Despite having not played a game for the Purple Haze, Harley Bennell also averages well in winning sides, going at 97.55 in Gold Coast wins over the past two seasons. Certainly some food for thought.

Andrew Mackie – the forgotten man of this preseason. After he finally got over the quad complaint which affected him throughout the first half of the season, Mackie finished 2015 like a steam train, averaging 95.56 in his final nine games of the year, only twice dropping below 86 in that period. Not to mention the fact that he copped a green vest in his return match, which when removed would boost his seasonal average to 86.86 on par with the 7th highest averaging defence eligible player. As a community, we love to jump on the potential breakout players with the potential to break in to the premium territory, but should we really be so quick to overlook a guy who has averaged upward of 79 in every season since 2007, playing 164 out of 176 possible home and away games between 2007 and 2014?

Jaegar O’Meara is a jet. He is awkwardly priced in AFL Fantasy, but if he plays a match in the NAB Challenge and lines up Round 1, can we actually say no to him, or any of the “three amigos”, for that matter in Real Dream Team? As long as his knee is 100% (which it obviously will be if he is playing), there are absolutely no concerns of durability playing all 44 games in his first two seasons at a career average of 90.9, including 15 career tons, 10 of which came in 2014. Although it appears a risk to pick up a player coming back after a year out of the game, at his price in RDT, I would honestly see more risk in picking up mid-pricers on another line in that price range. Looking at the options, I see Jaegar, who has only gone under 80 eight times in his last 40 games, as a far less risky proposition than relatively unknown or injury prone prospects, such as Aish, Leuenberger and Bird. With Leuenberger seemingly still a fortnight away from training with the main group, it would be tough to justify starting Pendlebury and Leueuberger over O’Meara and Goldstein, provided he is fit.

Ok, so I’ve seen a stat floating around about Heath Shaw averaging substantially more in Giants’ losses than victories, so as the stat nerd that I am, I thought I would investigate this matter further. I have used the last three seasons as data (two at GWS and one at Collingwood) as the Giants only won five matches in 2014 and hence would be insufficient to draw any clear conclusions. In this period, Shaw played 59 games, with his side winning 29 of these. From these 29 matches, Shaw averaged 86.62 points per game, with seasonal averages in wins of 84.27 (2015), 87.4 (2014) and 88.31 (2013). Compare this to the 30 games of data where Shaw played in a losing side at an overall average of 86.6 points per game, with seasonal averages in losses of 107.82 (2015), 77.92 (2014) and 66.5 (2013). Based on this, I would say that last season was an odd anomaly, in which Shaw’s best form coincided with a slight slump in the team’s form and hence wouldn’t let it stop you picking up Shaw from the start this year.