The true definition of risk versus reward. Will he average more than 81.6 in 2016? No doubt he will BUT that’s only a part of the Buddy story. 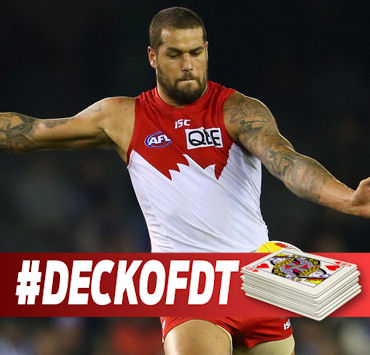 Lance “Buddy” Franklin is the true definition of risk versus reward.  Will he average more than 81.6 in 2016?  I have no doubt he will BUT that’s only a part of the Buddy story.

I liken choosing Buddy this year as the same decision you need to make when playing the last hole of your golf club championships.  A par will put you into a playoff, a birdie will win it yet a bogie – well there’s another 12 months wasted.  There’s only a gigantic lake between you and the green 200 meters away.  Do you go for it?  Make the right shot and you win.  Mishit it and it’s all over or are you going to play safe and lay up?

So, what is it with Buddy.  Are we playing safe or are we going for it?

Why I should pick him?

Because Buddy’s average in 2016 will be in the top 8 of all the forwards, probably even top 6.  Apart from 2013 when Alistair Clarkson wanted to find out if the Hawks could win without Buddy dominating games and hence banished him to the backblocks, Buddy has averaged over 95 every year since 2010 except for last year.

When Buddy goes big, he can go HUGE.  Who will ever forget the 204 points he scored against the hapless Roos in Launceston back in 2012.  It is these types of scores that can not only win us our weekly match but can also push us towards winning the weekly fantasy competition prize overall.

There is no doubt that when the Swans have the ball in the middle – there is only one player they are looking to give it to next? – BUDDY.  His presence simply demands the ball and if it is not going into the forward line often enough he has the licence to go elsewhere and get it.  John Longmire is well aware of the fact that the Swans desperately need to increase their scoring in 2016 and if that is to happen, who is likely to be the main beneficiary – BUDDY again.

Apparently, he is firing on the track at the moment.  There’s not many doing that in January is there? Source  and he is over all of his niggles etc, etc.

Buddy is the highest paid player in the AFL yet his fantasy salary is well and truly below that so there has to be some value there somewhere.  The final note is – how often do you get the chance to put a billionaire in your side (the Bondi billionaire) at this price?

Why I shouldn’t pick him?

Where do I start?

The real question about Buddy is not what his average will be in 2016 but how many games will he play?  As stated above his average scores since 2010 have generally been in the upper echelon however 19 games is the most he has played in any season and in 2012 he missed 6 games.

Whether it be due to injury or suspension – he has been known to hit people a little high, Buddy just seems to miss matches.  As a premium in our forward line can we afford to cover him with one of our rooks after he has transgressed again?  Of the players who are similarly priced D Smith and K Tippett both missed 2 games last year.  T Walker and M LeCras both missed 1 and A Christensen and M Harvey both missed none. I’m not sure any of these are likely to increase their 2015 average by as much as Buddy will however does that offset the fact that they will probably miss less games than Bud? Let’s look at this!

If Buddy was to increase his 2016 average to what it was in 2014 (94.7) it means that he will give you an additional 288 points if he were to play 22 games (than you have paid for).  If he manages 19 games he has given you an additional 249 points.  If the aforementioned players maintained their 2015 averages and missed only one match they would score less over the season as a whole.    It seems that maybe I should have put this little exercise in the “why I should pick him” section J

His overall average, even in his good years, does come with the occasional icy cold day.  Last year Bud had 3 scores of under 60 (not counting his red vested round 22 match of 36) and 4 similar matches in 2014.  He really does give you a roller coaster ride with many highs but a few lows as well.

We all know about Buddy’s “mental health” issues but, do we really.  As a general run of the mill footy follower we have really been told nothing about these issues. The only thing the Swans continue to say is that he has “issues” and we should respect his privacy.  This then leads to all the following questions.  How long has he had these issues?  Is this the reason for his slump last year?  Is it simply “depression” or something more sinister?  Will it (whatever “it” is) return midway through 2016?

These are serious issues we need to make in choosing Bud.  Probably less of a risk in fantasy with 2 trades every week but is it worth needing to make a trade (if necessary) in the less trade friendly RDT?

KING – Buddy has the potential to be a 2016 Ace however it all comes down to whether he will play 22 games or 19 or less.  He has the potential to win you games but conversely if he has one of his “off” days this could be the difference between a win and a loss in a tightly contested match.

In every facet of life there are risks to be taken.  Malcolm Turnbull risked his political career by challenging Tony Abbott and look where he is today.  By the same token Tony Abbott risked his career by making a “captain’s choice” and it didn’t turn out so well.

If you plan on getting to the higher rankings in fantasy or RDT, you cannot do so by selecting 22 “safe” players.

Is Buddy the risky one for you?

Bandicoot  –  anyone wishing to partake in a $50 RDT cash league can contact me at fawcusm@dodo.com.au

Have been a DT fanatic ever since the days it was first introduced in the Age newspaper. months of October to January are such a waste of time with no DT work to be done. February can't come quick enough to get started.