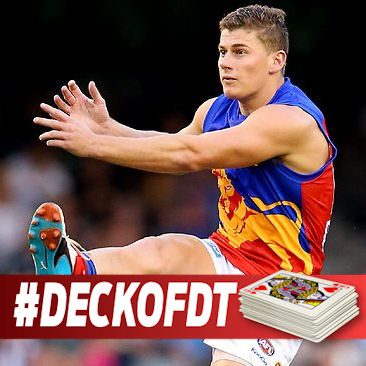 From rounds 13 to 23 he only went below 80 once, and averaged 102 over this stretch of 11 games – that’s definitely  premo territory for a forward! It may just be a coincidence but there is a general pattern of when Rocky was going huge in 2015 Zorko seemed to score better as well….

Without the likes of Swan, Titchell and Robbie Gray in our forward lines this year there are a few spots to fill. Yes he is a mid/fwd- but lets face it he will only be selected as a forward in our teams. His dpp may come in handy over the bye rounds but other than that he should be firmly anchored somewhere around F4.

He played all 22 games in 2015 so we can tick the box of durability which is important- particularly in the limited trades Real Dream Team.

With Redden leaving the club it should open up the opportunity for even more time on the ball for Zorko, and with Rocky and Beams generally copping the attention from any taggers little Zorks is often left free to zip around and pick up those lovely little uncontested plus 6’s.

The Lions have a lot of players they can rotate through the midfield, with recent recruits like Beams, Robinson and even Christensen likely to push for more mid time if fully fit this year as well as guys like Lewis Taylor likely to also push onto the ball.

Joker! (ok Queen) – If what we saw in the second half of last year is bought to the table from round 1 this year – Zorko is every chance to be challenging for a spot in the top 6 forwards for 2016. It may be a more popular decision to wait and see how he goes early on and keep him in mind as an upgrade target – at this stage I will be starting with him.