Join Anthony as he runs a comb through Fremantle and pulls out some players you should have on your watchlist. 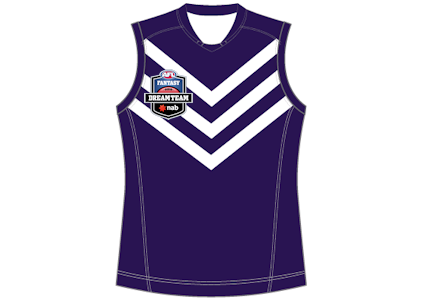 ANTHONY’S FIVE FROM THE DOCKERS

Fyfe is an underpriced gun. Scored 87 in the trial match against the Crows last weekend. 87 from 58% game time! Reports say he was absolutely everywhere racking up 19 disposals (11 contested), 6 clearances and a goal. But we know he can score points, for me the most encouraging sign is that he isn’t favouring his shoulder at all and is tackling and bumping at every chance. As I said, for his price and potential I believe he offers tremendous value. [Deck of DT]

Thought I’d pull one out of left field here. But throw Hayden Crozier on your radar. Got his chance last year as the sub for 3 games before coming down with glandular fever. All preseason reports have him flying on the track (but everyone is at this time of the year right?).

He’s in the mould of a younger Fyfe in that there isn’t much to him but he can take a grab and hold his own.

Scored 25 against Geelong and 17 against West Coast in the NAB triple headers including a goal against Geelong but the reason he is on our radar is the 3 goals and 84 he posted against Adelaide in the trial match last weekend. Impressed everyone at the game including Mr Lyon who wants to see him given more opportunity now.

With forward lines slim for rookie choices this year, Crozier may be worth a look.

Pearce has been a solid 70 avg player over the past 3 years but could a new club help him breakout? Possibly, here’s a couple of reasons worth considering.

Switching from Port Adelaide to Fremantle should see Pearce escape the taggers who have hampered his score in the past.

Playing on the wider ground of Subi usually benefits running players who can use the space, he will be there every second week.

Freo seem to be intentionally looking for Pearce to be their ‘link’ player when bringing the ball out of defense. To the point where a couple of times in the NAB game against Geelong they held up the ball until he got free.

I think these reasons definitely warrant a closer look at Pearce during the NAB cup.

2.5% That’s how many coaches currently have Barlow in their side. That is .1% less than coaches who currently have Zac Dawson in their side! If your looking for a POD midfielder than Barlow is the perfect option. Scored below 100 only 7 times last year so you could say he is slightly underpriced considering he wore the vest a couple of times. From the looks of his NAB form he’s back to his ball winning best with 21 disposals in the triple headers and 27 disposals against Adelaide to finish that game with 97 points.

He is incredibly consistent so if he fits your team structure then lock him in and watch the 100’s roll in each week.

A fit Sandilands is someone you must consider. Before last season he averaged 95 points per game for 3 years straight! He dominates ruck contests generally racking up the +1’s for hitouts and constantly floats around the ground picking up cheap +6’s!
Unfortunately it has been awhile since we’ve seen the big 211 fit and this looks to continue with his new hamstring injury keeping him sidelined till round 3 or 4. At an average of 87 he is underpriced for his ability, so with 2 trades per week to use or lose it may be worth keeping an eye on him in his first 2 games. If he looks set to rise and (more importantly) fit and uninjured then jump on!

Fremantle have a few other players to watch over the pre-season.

Johnathon Griffin (RUCK) $397,100 – I’m seeing a lot of love for Griffin at the moment and I’d expect this to increase as people keep seeing his scores over the NAB games. Just keep in mind that these scores are all as the #1 ruck with no Sandilands in the side. Lyon showed last year his reluctance to play both big men in the same side, dropping Griffen for Sandy in both finals. The one game they did play together in round 23 saw Griffen score only 63 points compared to Sandy’s 106. So my concern with Griffen is that he’ll play the first 2 rounds as the #1 ruck, averaging 80-90, then if Sandy returns in round 3 you may be stuck with an expensive poor scoring or non playing ruckman. Definitely safer options out there.

David Mundy (MID), $451,800. There is a lot of hype around Mundy from coaches hoping he can recapture his pre injury form and push for a 100 point average. He’s had a delayed preseason after tweaking his injured ankle again and played 63% game time against Adelaide for 17 Disposals and a goal. Not a bad return but i’m thinking with his ankle injury flaring up again he may be too risky. There are better and safer options out there at this price.

Nick Suban (DEF), $264,500 – Training the house down this preseason and it’s showing. Scores of 34 and 26 in the NAB triple headers. Lefty put together an awesome write up on Suban so give it a read if you’ve got space for a midpriced defender! [Lefty’s Leftfielders]

Matthew Pavlich (FWD, $489,400) Underwent back, hip and achilles tendon surgeries during the preseason but is back in full training and is ready for round 1. When Freo were playing well in the second half of last year he managed 2 scores of 144.

Anthony Morabito (Mid, $108,500) and Viv Michie (FWD, $108,500) Put these guys on your mid season upgrade watchlist. Morabito has recovered well from LARS surgery on his knee and is expected to resume full training by round 1 and Michie has had a freak run with injury but will be managed till mid season where according to Lyon he will be given ‘every opportunity to play’.