The Crows and the Dockers played a trial game at AAMI Stadium on Saturday. I have put together some comments from the Crows and Dockers websites as well as from my man on the ground, Max Phillips. 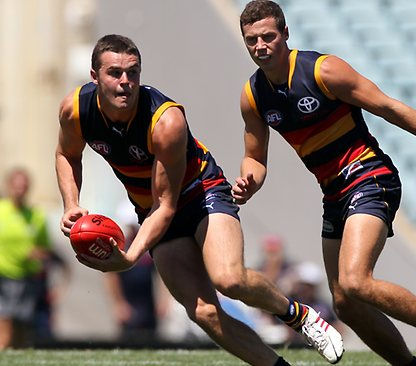 Unfortunately I wasn’t able to get along to the Crows v Dockers trial game at AAMI Stadium on Saturday lunchtime.  However, I did ask Max Phillips (@maxiphillips) to send me some notes.  Below is what he was able to send me through.  One thing to note though is that it was around 35-37 degrees throughout the entire game and some guys only played half a game.

Brown & Jaensch impressed racking up posessions in the back half in the race for Doughty’s spot.  Tambling and Laird good also.

Wright’s stocks continue to rise with DPP status and plenty of the ball in the first half.  Sloane also prolific.

Fyfe did not find massive amounts of it, but everything he touched was golden, including characteristic pack marks. (Fyfe didn’t play the first quarter)

Crichton looks to have stepped up another gear, found a heap of it across half back for Freo.  Crozier and also impressed.

Barlow got a heap of it around the contests too, definitely consider.
Here are some of the Champion Data stats from the game for the Crows players from www.afc.com.au

Rory Sloane: eight kicks, seven handballs, three clearances and one inside 50m (first half only)

Taylor Walker: five kicks, one handball, four marks and one inside 50m (first half only)

Some of the comments for the Fremantle guys from www.fremantlefc.com.au

Michael Barlow was his usual tireless self, collecting 27 disposals in the midfield, while Tendai Mzungu and Hayden Crozier both kicked two goals.

David Mundy also made a successful return to competitive action after a minor ankle injury had kept him out of the intra-club and first NAB Cup
round.

Jon Griffin rucked most of the game to finish with nine disposals and 27 hitouts, while 21-year-old recruit Jack Hannath had four touches and nine hitouts in a back-up role.

There were also heartening signs from Jesse Crichton, who had 19 disposals running out of defence, and Zac Clarke, who looked strong and fit in gaining 15 disposals, seven marks and a goal.

Nat Fyfe didn’t play the first quarter, but he put on a midfield master-class in the second term, amassing 10 disposals (six contested), four clearances and a goal.

The 21-year-old star ended up with 19 disposals (11 contested) and six clearances.

Were you at the game?  What have you heard?  Let us know your thoughts in the comments below.

Thanks heaps to Max for the comments and the websites for the reports.