Griff tell us why you should pick Heath Shaw in today’s Deck of DT. 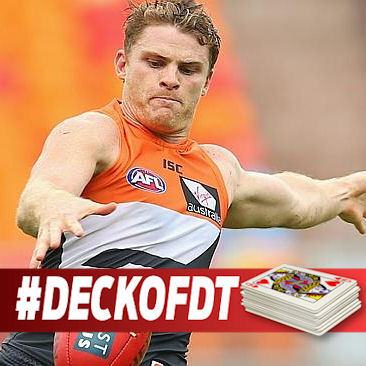 So it’s come to this. It’s my job to tell you to pick Heath Shaw.

I need a minute. Just watch this gif a few times whilst I compose myself.

Nope. Here’s a video of him getting knocked out by Kurt Tippett to buy me time…

Alright. Let’s do this!

Heath Shaw in 2015 was… outstanding. He played every game for the Giants, averaged 96 in AF/RDT and 112 in SC, won the GWS Giants BnF and won All-Australian selection.

Mr ‘Reverse Changes’ seems to have turned a corner at the Giants, and his maturity and leadership (I can’t believe I’m writing this either) have been a major cornerstone in the Giants push towards a maiden finals series.

Heath has been given licence to play his natural game at the Giants, and his natural game is a thing of beauty for fantasy football coaches. He chooses to kick the ball FOUR TIMES more than he is willing to handball it, he has no issue roaming up the ground (with the most running bounces in the league in 2015), and will often run behind the man with the ball pleading for cheap possessions. I’m pretty sure he’s even done this to opposition players.

Historically, Shaw’s fantasy game has never been questioned. In the modern world of fantasy football, where everyone wants dual position defenders who spend half the game in the centre square and shouldn’t be defenders anyway, Heath manages to consistently be one of the highest scoring pure defenders in the competition. Heath hasn’t dropped below 80 points per game since his second season. That’s 10 years straight as a reliable defensive option (for scoring)!

Last year was his best season to date; with most years seeing him score respectably in the mid-80s, for an average of 85.12 since 2006. He had season highs of 120+ last year on four occasions (with 147 against Fremantle, 136 against the Western Bulldogs, 128 against North Melbourne and 125 against Gold Coast). He also scored a further seven scores above 90 – exceptional for a defender.

His role isn’t under question, he hasn’t been fitter, he’s in the form of his life and those around him are only going to get better, meaning he will rarely ever be tagged. He’s essentially locked to be one of the best six scoring defenders by year end.

Right. This is the easy section.

Historically he should be on more Never Again lists than Shaun Higgins and Travis Cloke combined. Last year was his first full season since 2007, as he just finds ways to miss games. Be it injuries to the body or misfiring synapses in the mind, Heater simply hasn’t been trustworthy.

That said, he isn’t carrying any injuries, and seems to have his head in the right space. Huh.

I guess with AF now offering trades every week, even if he does do something so monumentally stupid that it makes Sam Newman blush, you could just trade him out. And across all formats, it would be at a premium price allowing you to get anyone you want. Hmm.

If we want to nit-pick, he’s one of the best premium defenders available but is priced appropriately – so no discount. He can be a little up and down, with a season low of 61 last year (just ignore the massive high scoring if you want). He also isn’t dual position like some players. Most importantly, he is Heath Shaw.

Damn, this was supposed to be the easy section, but he’s actually hard to fault.

With AFL Fantasy adjusting prices after each game, he’s not exactly an upgrade target because when you realise you want him, he’ll be pretty expensive. In Super Coach and Real Dream Team you do get a few weeks to consider him if he isn’t in your starting line up, but if he pumps out a couple of 120+ games to start the year (against Melbourne and Geelong), you’ll be burning a trade (and big money) to bring him in.

Ladies and gentleman; Heath Shaw is… a lock.

I need a drink.