Jake’s back with the second instalment of the mini-series: Best 22. This week he proposes the top 8 Midfielders and Ultimate Ruck pair to complete the best on field team you can have over the last 6 rounds. Who will make it? 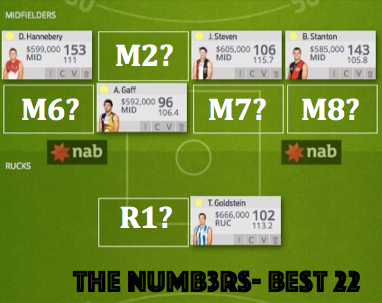 Hello and welcome to the second edition of The Numbers- Best 22. This week i will be reviewing last weeks performance from my proposed Forwards and Defenders, and also predicting which 8 Midfielders and 2 Ruckmen are the elite in their position. First, here is the review of last weeks article. If you haven’t checked that article out yet, I recommend you do.

Shaw, Hodge, Mundy and McVeigh all tonned up, and thus it would be very rude to demote them from the top 6. Special mention to McVeigh, who was the cheapest of this bunch and the one that many believed was not worthy, he went out and smashed a 131 in the demolition of the Crows. He increased 10K, however is still a bargain at $484K, with a more than attaianable BE of 71. If you’re upgrading down back this week, then McVeigh is your man.

Picken scored 99, and just missed out on a 5th straight ton. He holds his positions at D2.

Boyd was subbed out shortly after 3QT for an almost respectable 76. This either means he has a niggling injury and will be monitored (read: rested or that they were going to win by nearly 100 points and they might as well rest him now, instead of giving him a week off before finals. Hopefully the latter.

The other best scores from defenders were from:

Rampe (127)- Just about everyone from Sydney tonnes up, his two weeks before that were both 68. Not worthy of a top 6 DEF.

McPharlin (109)- And with that name, it becomes obvious I have already scrolled down too far.

The crowd favourite was Elliot Yeo, as 49% of you voted in last weeks article that he was deserving of Top 6 Defender. He scored a mere 69 points against gold coast. It must be noted however that since round 4 he has (without fail) alternated weekly between 100+ scores, and sub 100 scores. This week was also going to be a sub 100 score, and therefore (history states) he should be right for a 100 this week.

And so the top 6 defenders remain the same.

Dahlhaus, Swan, Adams and Bartel all scored 100+ this week, and thus are deserving of their spot in the top 6 forwards. I especially enjoyed watching Dahlhaus’s game on the weekend, he tackles hard, wins plenty of clearances and is also happy to lead into space for a cheap +6. Junk Time Jimmy scoring 28 points in the last 15 minutes of the game to ton up from nowhere was another highlight.

Martin managed 90, and similar to Picken, this is a solid score that makes it impossible to eradicate him from the top 6.

Riewoldt. I took a risk including you in the top 6 forwards. Ahead of many more popular picks, I acknowledged his great form and included him. Unfortunately, he gave me nothing this week, and I now have no choice but to eliminate him from the Best 22, but who comes in?

T. Mitchell (132)- Finally! I’ll keep him for the rest of the season, and he might end up being Top 6, however his role is so unpredictable that he can’t quite be trusted.

Bennell (130)- A good score in a great game, and coming off a 124 the week before he could be the man. But he isn’t proven, and its easy to imagine him getting tagged to a sub 50 score. I’ll pass.

Hunter (127)- Matt mentioned him in the Weekend Washup, however I think whilst he provides obvious value, he is not Top 6 Material. Yet.

Gray (121)- Welcome back Robbie. 37 Touches is more than useful for any forward, and to be honest I knew in my heart that he was deserving of a spot in the top 6. His averages have been tarnished by a red vest, however if you take that out he averages 102.8 since round 4. Additionally, he was also your favourite pick, as 32% of you voted that he was the most deserving forward.

Might as well get this over and done with, as surely everyone already knows the result. Its the same system as last week, a combination of season average, last 3 average, last 9 average, 3 round projected and ease of draw produce a predicted average over the last 5 rounds.

Martin beats goldstein! This is largely due to him having the easiest draw of the ruckmen, however fixture is more important for ruckmen than it is for other positions, as all ruckmen are fairly similar whilst forwards, midfielders and defenders can vary greatly in role. This prediction further supports a few whispers that a 90K downgrade from Goldstein to Martin might be a solid way of generating cash

Despite not taking out R1, 111.18 is still a very handy average to have over the last 6 rounds. He has been the highest averaging player over the last 9 rounds, averaging a handy 127.8 in this time. If you jumped on him after Martin or Mumford failed you, then you would have to be happy with his performance lately. I managed to snare him up for a mere $500K at Round 10, and have captained him every week since then for an average of 130.1. Not bad for a ruckmen.

He really is a genuine ruck rover, and plays in the ruck sole because Geelong have no one else better. He gets only 16.5% of his score from hitouts, whilst someone like Goldstein gets 35% from hitouts. As he works around the ground a lot and gains plenty of clearances, he rarely has an off game. Averaged nearly 100 this year, and that should continue over the last 5 rounds.
Jacobs- 92.37

As a year-long Jacobs owner, I can only describe he’s year as disappointing. Started the year as the second highest priced Ruckman at $550K, as has scored far too many 60’s to go with his 8 tons this year. Still a keeper, but not living up to his potential.

Of the cheaper options at the start of this year, Naitanui has clearly been the best, outscoring Leunberger, Bellchambers and even Grundy in total points this year. Three tons in a row a couple of weeks back, but his last score of 57 is disappointing for his owners. Still averages 95.8 over his last 9 outings.

He has been a more than handy stepping stone, averaging 90 over his last 6. Unfortunately 80-ish scores are not comparable to the monster scores being produced a little higher up the table, and you wouldn’t want him on your field come grand final day.

Midfielders Now for the big one. The hall of fame. The Top 8 Mids. The 16 Mids that are being analysed are the 10 highest scorers this year (Steven Hannebery, Pendlebury, Armitage, Gaff, Stanton, Priddis, Kennedy, Ellis and Ebert), the next 5 highest average’s (Lewis, Fyfe, Montagna, Dangerfield, Macrae), and Tom Rockliff. Also note that player eligible also as a Forward or Defender (like Swan or Hodge) have already been selected in their other positions, and thus do not feature here.

A season long legend, MAcrae is still only owned by 2.9% of the competition. Thats less than a third of the ownership of Jake Kelly. Yes, thats the Kelly that scored 4 fantasy points in 4 quarters of footy. With the second easiest run home of the midfielders researched, and a 9 round average of 116, He is more than worth his price tag of $605K. I’m finding the money to go Beams->Macrae this week

Steven- 111.74 Wel deserving of a spot in the top 8 Mids, Steven has been the season’s highest scoring player for a long time now. He has dropped off slightly, with a Last 3 average of 98, however his 9 Round average of 112 is still very respectable

Stanton- 109.52 As a season long owner, I can only describe Stanton as a roller coaster. Two scores below 60, Four others under 100, and 11 above 105 is pretty handy though. You could call it selective stats, however he is the highest scoring midfielder since round 11, only dropping below 113 once in those 7 weeks.

Montagna- 107.45 A latecomer to the St Kilda fantasy friendly party this year, Montagna missed the 5 of the first 7 rounds. Since then he has not dropped below 89, which included a stretch of 6 games straight of 110+ scores. I’d be more than happy with him in my team, however at $575K he comes at a price.

Gaff- 107.35 The outside runner beats fellow eagle Priddis to a spot in the top 8 Mids, with a projected average of 107.35 over the last 5 rounds. This is good enough for a spot as M6, which is fitting as he has scored the 6th points of any midfielder this year, including a run of 9 straight hundreds that ended with his 96 on the weekend.

Lewis- 106.74 Started the year with a bang, then drifted out after his suspension, but looks to be back in time for finals. He’s got

back to his old tricks of racking up +6’s in the backline, whilst still can kick goals. Should be a safe bet for a top 8 Mid, despite the tough run home fantasy wise.

Fyfe- 105.89 Been a little bit disappointing over the last few weeks (since i traded him in). He still averages 105.8 this year, and more importantly has the easiest draw of any midfielder over the last 5 weeks. If he can suit up this week, look out for another ton.

Dangerfield- 105.88 Just misses out on top 8 Mid status by the smallest of margins, however all this will change if Fyfe is not named on Thursday. If Fyfe misses once again, Dangerfield will take his place as a more than handy top 8 Midfielder. Capable of pushing 130+, and very rarely goes below 80.

Pendlebury- 105.46 Toughest fixture of the researched midfielders, which bumps his projection out of the top 8 mids. Still a very worthy scorer and one that you wouldn’t be trading out unless of course he get injured. You would think he would step his performance to another level if Collingwood were any chance to play finals in 2015.

Priddis- 105.30 Didn’t quite live up to the hype in his game against Gold Coast last week, however still managed a passable captains score of 106. Only dropped below 90 thrice this year, and should push a 105 average over the last 5 weeks, with a fantasy friendly fixture.

Kennedy- 104.87 Been especially good since coming off the bye, only dropping below 100 once in this time, for a still respectable 95. Should be plenty more where that came from, with an expected 11.27 100+ scores expected from Sydney midfielders over the next 5 weeks. He should take around 4 of these.

Ebert- 103.07 Look out for a couple of big scores over the next two weeks as he faces the Bulldogs then GWS. If you’re an owner, hold for the next couple and then reevaluate. Probably not worth trading in at the moment, look at Joel Selwood around his price.

Armitage- 102.43 Early season lead out man has dropped off a bit lately. Still well and truly worth keeping, however anywhere near the form he had at the start of the season. Only averages 99.8 across his last 9 games. Not top 8 Mid worthy.

Rockliff- 97.46 We all know he’s better than 97.46, however his recent performances suggest otherwise. I suggest he will average in excess of 110 over the last 5, however the formula that i have consistently used throughout this series proposes he won’t crack a 100 average. It will be interesting to see whether no beams means a return to last years scores. Should be nice and cheap next year.