Griff flips Adam Treloar in the Deck of Dream Team and makes a bold statement: He only has one rival as the best young player in the AFL. 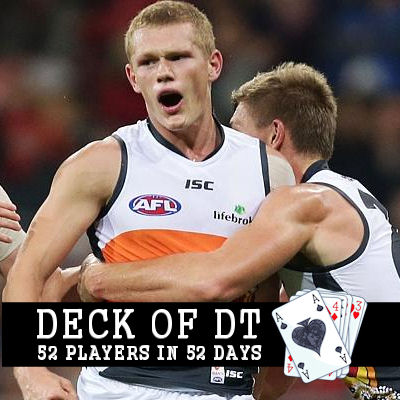 Adam Treloar is close to, if not, the best young midfielder in the AFL; only truly rivalled by Jaeger O’Meara. That’s not an just an opinion; it’s backed up by statistics.

From Treloar’s intake year (2012), only Toby Greene comes close to averaging what Treloar has averaged over the past three seasons, with Treloar averaging 91.63pts from 58 games. In the early years, when career stats aren’t supposed to be impressive, Treloar is ranked ahead of Greene (91.03pts), Tom Mitchell (88.93), Dylan Shiel (81.35), Stephen Coniglio (80.38) and Devon Smith (79.05) for best scoring new players from that year. O’Meara (2013 intake) comes close with an average of 90.90 from 44 games, approximately 5pts more on average than Treloar to the same point.

For total games played, Treloar is only behind Ellis (63), Wingard (62) and Smith (59), however he has played more minutes than any of them, with Ellis (9), Wingard (7), and Smith (2) all having vest affected games. Amazingly, for a young modern era player, Treloar has never been in a green or red vest.

Now at 58 games, in his first 50 games Treloar has had more 30+ disposal games than Ablett Jnr, Pendelbury, Watson, Dangerfield, Kennedy (Syd) and Judd; combined. He also averaged more possessions than any of them over the same period of time. In fact, when comparing him to established players, only Joel Selwood comes close to what Treloar is producing as a midfielder in his first three years; with Selwood playing three more games in his first three years, and averaging just 2.11pts more than him. This is the company that Treloar keeps.

Treloar has the high ceiling you want from a premium, with a career best 159pts against Melbourne (in the rain) last year. He is also consistent; ranked 6th in the league by Champion Data from players who played more than ten games. With 30% of his scores last year over 115 points and only three scores below 91pts, it means good things. Two of his low scores came early in the year, against St Kilda (69pts / Round 2) and Adelaide (68pts / Round 5) and his lowest thereafter against North Melbourne (84pts / Round 20) would still be acceptable as a lower end score. If you remove these three scores, he would have averaged 108.7 last season.

Treloar, like all Giants, also has the round 13 bye. This means he can be there, scoring you points, when most other midfield guns are going missing. The 17th most expensive midfielder for 2015, Treloar had a better fantasy output in 2014 than common favourites Nat Fyfe, Bryce Gibbs, Trent Cotchin & Brent Stanton and this alone can justify his position in your team. If that’s not enough, he’ll also be a unique alternative to those willing to take the rollercoaster of those aforementioned players: he is currently in only 3.6% of AFL Fantasy teams.

Let’s be honest; tactics or favouritism. They would be the only two acceptable reasons to not pick Treloar.

On Tactics
Instead of Treloar, you may want a mid-price player who has been discounted (like Tom Mitchell / -$154,000) even if his place in the Sydney team is questionable. Maybe you want a more proven player around the same price (like Jobe Watson / +$3,000) even if, well, Essendon and ASADA and all that. You may prefer a Dual Position Player (like Dustin Martin / -$33,000) in your midfield instead of Adam, even if Dusty is a little up and down throughout the season (if not the match). Finally you don’t pick him because you want a very hard-line Guns and Rookies strategy; picking only uber-premiums (like Scott Pendlebury / +$31,000), even if it means taking risks with the cheapest of the rookies.

But really, those options aren’t anything other than tactical reasons not to pick him.

On Favouritism
Oliver Wines, Jaeger O’Meara, Dion Prestia or Toby Greene may be your preferred young midfielder option – if tactically you’ve decided you’re having one. Maybe you like O’Meara’s hairstyle or Greene’s swagger better? Only favouritism, which includes a ‘break-out’ gut feel or a preference for up and down scores would justify any of these players over Treloar. Statistically, Treloar is the better option for 2015.

Whatever downside you think of; Treloar provides an answer. Oh yeah, and he is still only getting started: he turns 22 in March.

KING – We are so close to an ACE here. Not having scored 100+ for more than the one season (due to age) and two scores under 70 last year are the only things holding me back (possibly harshly) from assigning Treloar the converted ACE status. And that’ll likely come this time next year.

Treloar is a set and forget type player, similar to a young Joel Selwood or Scott Pendlebury. He can find the ball and find you points and you will rarely ever have to worry that he would do anything else. Lock.