Looking for a unique forward? Griff takes a look at one of his GWS boys, Devon Smith, in today’s Deck of DT. 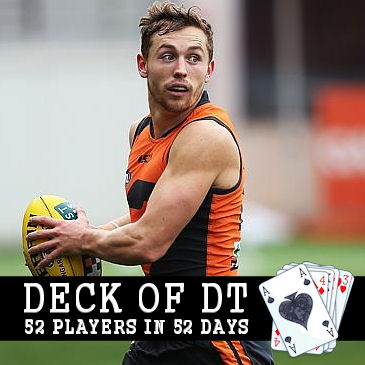 Because he is unique, under-rated and bye-round friendly.

In 2014, Devon averaged more points per game as a forward than traditional favourites Patrick Dangerfield, Nick Reiwoldt and Jarryd Roughead. He scored more total points than cult favourites Lance Franklin, Chad Wingard and Luke Dalhaus. And he had more 125+ scores than perennial accumulators Dustin Martin, Robbie Gray, Luke Parker and Keiran Jack. On top of this, he will rarely ever be tagged, he finished last year with an ownership of less than 3% and currently, he is only being considered in approximately 7% of Drawing Board teams on DT Live.

The 174cm Smith does not need huge possession numbers to score big. When he doesn’t want the ball, he goes and gets it – and that’s not rhetoric. In 2013 (his second year) he was ranked fourth of all AFL players for forward half pressure acts and in 2014 he ranked fifth. He averages over four tackles per game, with a 2014 season high of ten and loves to kick more than handball: with 17 kicks for every ten handballs.

Devon is a big bodied midfielder in a short man’s body with an even shorter man’s lip service. He’s hard at it, wins the ball, and provides plenty of midfield aggression from the forward flank. He doesn’t wait in the goal square waiting for crumbs, he pushes to wing and influences the game (as shown by his brief 2014 highlights here). His height means he gets pushed forward for bounces, but he compliments this by finding the goals and he doesn’t mind roaming. He averages more than one goal per game, with a career high of five goals against St Kilda last year.

“But Griff: why can’t I just upgrade him later in the year if he is going well?”.
Well you could, but… The Giants start the year against some teams who will likely haemorrhage points. They open against St Kilda at the ‘G, follow that up with Melbourne in Canberra, have the Swans at the SCG and then get the Suns on ANZAC Day in Canberra. By this time he could be flying and you are behind the eight ball. As for beyond the opening rounds, for Devon, it doesn’t really matter who he plays, as shown above with his 130+ scores against Melbourne, Hawthorn and Port Adelaide.

Should you not pick him because of the obvious? He is one of the few top forwards starting 2015 without dual position Midfield/Forward eligibility. The game has changed and he may get it by mid-year in AFL Fantasy or Ultimate Footy, but do you want to risk it? That DPP would come in real handy for the round 11 and 12 byes. Then again, yes, you need some DPP action between your front and middle lines, but do you want that to be the sole reason to pick a player? If so, Rohan Bail is DPP Fwd/Mid this year for just $393,000 – enjoy that philosophy.

Should you not pick him because of the unknown? Injuries to Lachie Whitfield, Stephen Coniglio and Dylan Shiel helped Devon find more midfield time in the final few rounds of 2014; but with their return, his midfield time may reduce. With the addition of Griffen, it’s possible Devon will spend more time across half forward than in previous years without midfield rotation. Then again, the ball may come to him a bit more often than in previous years too, and if it doesn’t, he’ll probably go and get it anyway.

“But Griff: have you seen his bottom end scores!?”
Should you not pick him because of the… Yeah okay, this is the actual reason you wouldn’t pick him. In 2014 he scored below 80 on eight occasions – five of which were in the 60s. Combined with his 59 points against the Swans in round one and it starts to look, not great. Then again, the start of his 2014 year wasn’t great. Coming out of his round 10 match against Richmond, he averaged just 82 points.

But it does get better. Only three of those <80 scores came after round 10. From round 11 onwards he averaged 101.3, with a final five round rolling average of 107.4 including his final three round average of 112.7.

If you pick him in 2015, you will be hoping he carries his form from the back end of last season into this year. As for job security? He is as secure as any player could be in their team and will play – just hopefully somewhere near the ball.

I was tempted to go ‘Queen’ here as he is a young player (entering his fourth year) and yet to average 100+ for a full season. But a top ten forward should be a King. Devon is one of the most exciting small forwards players in the game. He hits the ball hard, even if someone else if holding it, uses it well, and with just 52 games under his belt, he is a leader, having played the second most games for the club of any listed player. Just watch the last minute of AFL from last season to see what he can do under pressure.

He has issues with his lower end scores, but with natural improvement, he should be able to lift those by at least ten points (a mark + kick + tackle) per game, if not more. Without adjusting his top end scores, this would lift his average to around 98 pts per game, and if you add on an extra 2 points simply because I like the bloke – we’re looking at a 100pt avg. forward. And as a forward, DPP or not, you don’t turn your nose up at that. Consider.

Any questions or comments? Drop them below or…
FOLLOW ME ON TWITTER:  @RLGriffinGWS and don’t forget to hashtag #DeckofDT