Viv Michie is a mature-aged lad from the WAFL. He did play one game for the Dockers last year and his scoring potential can not be disputed. Now wearing the red and blue he will walk into the Demons hoping for more luck in 2014. 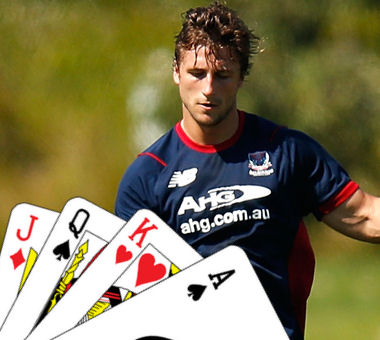 At the age of 22, Viv Michie finally gets his chance at AFL with the struggling Melbourne Demons. After being drafted in 2010, Viv has been extremely unlucky with injuries and is exactly what Melbourne need this year.

He is a ready made midfielder at 85kg and 185cm tall. Viv played the majority of his football last year with the Peel Thunder (WAFL) and in his 16 games with them, he had 14 games with 20+ disposals and 5 games over 30d (avg. 26d for the year). He is a ball magnet and ranked #1 in clearances and ended up winning the Thunder’s best and fairest.

He did play one game for the Dockers though last year and started in the green vest. He came on in the 2nd quarter and knocked up 49pts for the remaining part of the game with 13d proving he has a lot of scoring potential.

Michie should be in Melbourne’s best 22 and is a prime player at his price to play as your 7th or 8th midfielder depending on how your structure is set up.

Will Paul Roos give him a chance and will his injured riddled body hold up the competitive AFL level?

These are the two biggest factors surrounding Michie. I believe the answer to both these questions will be YES. But these are the questions you need to ask yourself and if you answer NO, then Michie is not the man for you.

He is price a little awkwardly too with that 1 game from last year. This will turn many away from him in 2014. He’s not really rookie price and you might be able to save some cash by grabbing a cheaper rookie.

JACK – I really like Viv Michie. He has even been targeted as a potential leader at Melbourne over the next few years. I have been following this ball magnet for a few years now and finally he’ll show us what he is truly capable of. His ability to win the ball can not be disputed. Can he stay fit will and Roos give him a chance? I really hope so because he is currently sitting nicely in my team.