Every upgrade needs a rookie downgrade so check out what Jeppa has to say about his ‘juniors’ ahead of Round 9. 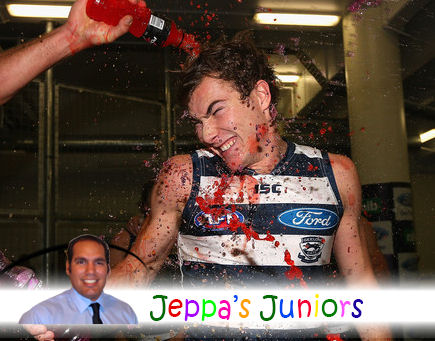 Geez it’s handy when your rooks rack up 100+ scores, it’s even better when they are your defenders. The performances of Terlich and Vlastuin on the weekend gave coaches a reason to smile and forget about some recent back pain. Unfortunately, it wasn’t all smooth sailing. Rooks and vests continue to be a common theme and in Round 8 it was Mayes and Whitfield that caused coaches the most angst.

At this stage of the game, coaches need to trade aggressively and make those early upgrades. Many rookies have topped out (Whitfield, Jones, Wines) and there are a heap of under-priced premiums available (Watson, Deledio, J.Selwood), so don’t miss the opportunity to make an upgrade this weekend!

Nick Vlastuin’s (DEF/MID, 131, $282,300 & BE -56) amazing effort against the Dees saw him finish with 19 kicks, 6 handballs, 16 marks, 2 tackles and a goal. He currently is the 8th highest averaging defender and Richmond’s possession game will see him push the ton week in week out. Not far behind Vlastuin was no nonsense defender Dean Terlich (DEF, 120, $289,800 & BE -13). I can’t remember the last time a defender, let alone a rookie defender finished with 10 tackles in a game! Vlastuin and Terlich have established themselves as important players for their respective sides, so hold on to them because both will prove invaluable during the bye rounds.

Jaryd Cachia (MID, 91, $156,200 & BE -51) was the surprise of the round after he avoided the green vest and instead given a full time midfielder role. If you’re one of the 1,209 coaches that currently own Cachia, enjoy the healthy prices rises because he should hold his place in the seniors for a few weeks yet.

Please do not write off Brett Goodes (DEF/MID, 66, $304,000 & BE 63)! Goodes is an important member of the Bulldogs backline and even though he currently has a breakeven of 63, he will score consistently and continue to steadily rise in value.

I’m putting Sam Mayes (FWD/MID, 31, $285,300 & BE 93) in the don’t panic category because I believe his Round 8 green vest was only to manage his workload. In my opinion, Mayes is still in the best 18 at the Lions so ride the rollercoaster and stick with him. Ben Kennedy (FWD/MID, 19, $117,000 & BE 2) also started in the green vest but it was for the second time in his short career. Kennedy only has a breakeven of 2, so you’d be crazy to trade him out before seeing what he produces this weekend.

The most traded in player so far this week is Jackson Thurlow (DEF, 55, $116,200 & BE -56) and with good reason. Thurlow is quick, attacks the footy well and always gives 110% He didn’t have a massive impact on the field against the Pies last weekend but don’t let that put you off. No other rook on the bubble has looked anywhere near as convincing so if you’re looking for a downgrade option, Thurlow is your man!

Jimmy Webster (DEF, 56, $108,500 & BE -29) is the next best downgrade target this week. In his first two games, Webster has proved he’s got what it takes to match it at AFL level. He’s a great kick and the Saints are desperate for someone who can run and deliver from the backline (ala Goddard). If you picked up Thurlow a week early and need another cheap defender, consider Webster.

Brent Staker (DEF/FWD, 61, $132,600 & BE -39) kicked the sealer with less than a minute to go against the Bombers to reassert himself at AFL level. Staker started like a premo and was on 45 at half time but struggled in the second half and finished with 61. With some more match fitness gained, I’m pretty confident that Staker will run out games better in the coming weeks and thus his scores should improve. He was used between wing and half back last weekend but I suspect that he’ll be thrown into a key position role for the next couple of weeks to cover for Merrett and Clarke who are both out with suspension. If Staker is used as a key defender, expect his scores to suffer a little.

Journeyman Matt Spangher (FWD, 71, $132,600 & BE -59) got a run against GWS after Josh Gibson was given the week off. Spangher appeared a little lost out on the ground but did his job none-the-less. Even if he’s named this week, his job security is too shaky for my liking. I’d only consider Spangher if Lake and/or Gibson was out for a decent period. Troy Menzel (FWD/MID, 8, $138,700 & BE 71) started the game in the green vest and was only unleashed at the start of the last quarter. He played at half forward and managed just 1 kick and 1 very good tackle but I can see why he was taken at pick 11 in last year’s draft. Menzel is a very skillful, smooth mover who will most likely end up playing on a wing for Carlton. Keep an eye on him this week because if he avoids the green vest and plays half decent he could be a very handy pickup given his DPP eligibility.

Tom Nicholls – With Zac Smith out for the rest of the season, Nicholls appears to be a suitable downgrade option for Blicavs or Daw in the coming weeks. McKenna said during the week that Nicholls is likely to come in (source) after showing very good form in the NEAFL including a BOG performance last weekend. I wouldn’t expect massive scores from him though. Daniel Gorringe should also be named this week as a replacement for Charlie Dixon who is expected to miss just one match with an ankle injury.

George Burbury – Yesterday Chris Scott announced that Burbury would make his debut for the Cats this weekend against the Power (source). Burbury is a medium sized forward who has improved dramatically over the past 12 months including a noteworthy performance in last year’s VFL grand final. When it comes to dreamteam, I’m a bit of a skeptic against medium sized forwards especially developing ones at Geelong but let’s see what the kid can do.