What a week! Thankfully that rubbish is over. Who was it that said that this game was going to be too easy this year? Certainly wasn’t me. This week we are back to normality so no rolling lockout, tonight is it. We will need to have all of our team set at first bounce tonight. 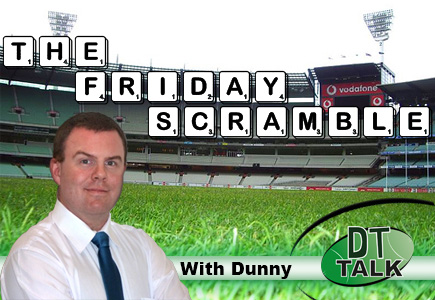 Another DTTalk Exclusive: The Friday Scramble – with Dunny

What a week!  Thankfully that rubbish is over.  Who was it that said that this game was going to be too easy this year?  Certainly wasn’t me.  This week we are back to normality so no rolling lockout, tonight is it.  We will need to have all of our team set at first bounce tonight.

So what do we do this week?  We need to check our teams and see if there are any serious holes in it that need to be addressed.  This time last year I would have been saying don’t trade!  However, this year, you have two trades to use this week and if you don’t use them….  You lose them!  So let’s look at a few of the things you should be doing.

If you have a guy like Mark LeCras or Dayne Beams you need to look at trading them out.  These guys are out for 5-6 weeks and 2-3 weeks respectively.  Given that we have two trades to use or lose then we should be doing this.  You shouldn’t be looking at holding that sort of cash on your bench for that length of time.  With LeCras the easy decision is to trade down to Josh J Kennedy if you don’t have him.  But with Beamer, you can trade him to pretty much anyone you want.

Luckily I didn’t fall into the previous category, however, this category has me written all over it!  Guys like Dangerfield, Scooter Selwood, Zorko or Scott Thompson.  There is a massive amount of temptation to get in there and use your two trades on fixing up these guys.  One thing that you need to do is Hold Fire!  Remember why you picked these guys in the first place, you picked them as premiums because you thought they were going to average 100+.  They have had one rubbish game and this could be the only bad game they play all year!  Last year Dangerfield started the year 89, 78, 91 and 66 for an average after 4 games of 81 before belting out a 140 and 142 in two of the next 4 weeks on his way to an average of 102.  Michael Barlow had two green vests in his first two games with scores of 52 and 67 before finishing the season with an average of 96.

This is where we predominantly make our changes at this time of year.  Perhaps you started the year without Ollie Wines, Jack Viney or Jaeger O’Meara.  If you missed all 3 of these then I am suspecting this is the first time that you have visited www.dreamteamtalk.com.  If so, welcome aboard!  But if you have just missed the one or two then this is when you should look at bringing them into your team.  These guys got off to a great start to the year and they look like they belong at this level.  You want to make sure that you are on these guys before the first price rises take place.

If you asked me what I would do first?  Well for me it is Long Term Injury fix ups, then Rookie Fix Ups and lastly Stuffed up Premiums.  So what I am trying to say here is keep the faith on your premiums.  Give them another week and see how they go.

One of the things that you could get caught out by is chasing the scores of the rookies that scored well last week.  Say you had Kane Mitchell who copped a green vest (as predicted here in the Friday Scramble) and you missed Matt Jones from Melbourne.  Just be careful that this week Mitchell may get the full game after only a quarter last week and Jones may get the vest being a second gamer.  Remember that just because we have all these extra trades doesn’t mean you have to swap rookies every week, particularly once the price changes start you won’t want to be doing that!

One thing we did learn last week was that all of the concern we had over some of our rookie priced players scoring well.  Guys like O’Meara, Stevenson, Heath, Pittard, Wines and Viney all did very well.  But don’t crack it when they come out this week and score a 35 or 45.  One guy that I am thinking of particularly is Campbell Heath from Port, he was sitting on 46 towards the latter part of the game and bobbed up in the forward line to get a +12 for a goal to bring him up to the 58 that he finished on.  This is what I mean, one decent act can elevate them and for a backman like him, don’t expect him to be trotting forward against the stronger teams and slotting a goal to lift his score.

It appears that those that went in with Dean Terlich can breath now as he will play this weekend.  Will he get a vest?  Personally I don’t think so.  I expect it to be one of Toumpas or Matt Jones.  Do you dump one of your other rookies like Heath or Stevenson to bring Terlich in?  At this stage if you don’t have to.  You can leave it for two weeks before you have to make a decision.  Let’s say Terlich smashes out a 90 this week and Heath gets himself another 55.  You could make the trade at that point, but you have gained nothing.  If you wait til after round 3 where Terlich gets a 68 and Heath has a 48, Heath will still have gone up, but Terlich wouldn’t have changed price yet as it was only his second game.  You gain a points scoring machine and also one price rise from Heath.

Great to see the big Leuenberger back in this week, so if you went with Longer or Blicavs as your R2 then you can now swap back.  As mentioned above we have Dean Terlich and Brad Crouch come in.  As the guys said in their Live show last night, if you have Beams or LeCras then you should be looking to trade them out.

So this week we have all 9 games across 3 days!  Thank Gary Ablett Snr for that!  It was a chore last week waiting for games to start and only having one on at a time!  Whilst it was good for watching, my DT Score wasn’t ticking over fast enough for my liking.  I hope your DT goes better this week, because that means there is a fair chance that mine will!!  Best of luck and I will catch you all on twitter @pkd73