After the success of the previous 5 Squared article a couple of weeks ago, Warnie, Calvin, Roy, Chook and Tbetta answer a new lot of questions after the first week of NAB Cup action.

5 Squared is a series that will aim to give you the best advice and educated opinions on the big topics facing DT coaches. This edition features the 3 DT Talk pioneers Warnie, Roy and Calvin, rookie expert Chook of Chook’s Rooks fame, and weekly Bullets writer Tbetta.

1. Which rookie-priced player impressed you the most on the weekend and is now definitely in your team?

Warnie – Jon Giles is the easy answer, but I’m going to say Gerrick Weeden (that’s with a soft ‘G’ thanks very much Fox Footy commentators). He kicked the first goal in both games on Sunday night and gave us 55 points in the game against the Bombers and 27 against the Dockers. Maybe he can replace LeCras? He averaged 15 disposals with 4 tackles per game in the WAFL last season, so at $104,200 he can be a nice little bench option in our forward lines.

Calvin – Sam Gibson. This dude is a 25 year old ball magnet. He was the captain of Box Hill last year and B&F winner averaging 28d and 4t at the VFL level. I interviewed Nathan Grima last week (will be up soon) and the Roos are pumped with how he is going. He played one game over the weekend for 9d, but did enough at this early stage.

Roy – Jon Giles was always going to be in my team but I have been in two minds about starting a rookie in the ruck division. If big Orren looks set for games and another rookie priced ruck steps up, it is an option I will consider on the back of Giles strong performance. I also loved Sam Gibson who is cheap as chips and Gerrick Weeden was sensational and has been in the system long enough to step up and have an impact.

Chook – I’m not sure about “definitely in my team”, but the performances of GWS defenders Sam Darley and Tomas Bugg gave me hope that I can look outside of the Richmond ranks to find some adequate cheap options in the backline. Both scored 36 points (Darley in the first game against the Western Bulldogs and Bugg in the second against Collingwood) but, more importantly than their scoring at this stage, both looked composed – even comfortable – trotting around at AFL level. Hopefully coach Kevin Sheedy’s on the same page and we get more than a handful of games out of these guys. I’m looking forward to monitoring both when the GWS take on Hawthorn in our home-town Launceston next weekend.

Tbetta – I’m on the Lachie Neale bandwagon! Seeing him at ground level gave me an insight you can rarely get from your living room – his poise, awareness and positioning was exceptional, no wonder he is a favourite of Lyon’s. Whether he can regularly produce decent scores is his next hurdle into my side.

2. What are you thinking regarding your ruck structure after dominant performances by the veteran Cox and GWS ‘rookie’ Giles?

Tbetta – I didn’t mention Cox in the Bullets (bordering on blasphemy), but he was awesome on the weekend. He had me thinking twice about him, but I think I’m going to stick to my guns and go with Sandi and Giles/Stephenson as my starting pair. Cox will always be there as an upgrade option after all.

Warnie – My thoughts have been to save some cash and start with McEvoy and then go with Giles/Stephensen as the second ruck… but after Cox being a DT scoring beast on the weekend, I think I want to get him – even if he is priced at 107. Coxy did play without NicNat in the side and Giles was without Brogan. I’ll wait a couple of weeks before committing to my ruck structure.

Calvin – As much as I’d love a big Cox (yeah I went there)… I can’t pay that much money for him. Especially after he had his best year ever in 2011 (avg. 108) and is 30yrs of age. There are ‘younger’ rucks with more upside this year. Giles was brilliant and may even start on my field… but Cox is tempting after what he did. But for me… it’s a pass for now.

Roy – Haha, maybe I should have read all the questions before answering! Cox was a standout and West Coast will continue to improve  which may provide him with even greater uncontested ball over the year. His game promped a re shuffle at destROY where the starting rucks are now Cox and Giles, where I previously had McEvoy.

Chook – I love what having a rookie ruckman on the ground does for the rest of my team. There are more guns on the field than during the annual Coloumbian Correctional Services’ prisoners v guards soccer match! Let’s see how Big O fares this weekend, but those performances by Giles certainly buoyed my hopes that a gun-rook structure in the rucks can work this year.

Chook – Mid-priced. It can be dirty word, or a dirty compounded modifier, if my old English teacher is reading. After having mid-priced Sydney disaster defender Ondrajs (you-don’t-deserve-correct-spelling) Everitt in my initial squad last year, I’m a little hesitant to draft in a Lake/Hargrave type, although that high-possession game looked to have made a comeback in the Doggies’ back half on Saturday. At this stage, a tentative “yes” to Ryan.

Tbetta – Hargrave is definitely on the radar, and if he continues his rare vein of form, he could possibly supplant Conca from my backline. Dual 47’s was a really pleasing effort from such a cheap option I thought. Meanwhile, Lake and injuries is like Shaw and stupid ideas, they just go so well together, while Howard is a bit of a stretch for me.

Warnie – How awesome was it seeing Hargrave’s numbers tick over like that on Saturday night? Wowee! I’ve been skeptical of him as he has only had one ‘big’ DT season, but that was Dream Team sluttery at it’s very best. I did like Howard though… and especially after Roy talked him up heaps last year!

Calvin – I just bloody looked at that Dawg, great question. Yeah I think I might. They are sooo cheap and guys like Heppell, Shaw, Delids etc are worth so much more and have the potential to score the same. These mid-priced guys come with such a ‘risky’ aspect to them though. Lake, Hargraves and even Grimes all have the potential to give us headaches… but so does Heath Shaw doesn’t he?

Roy – I have a soft spot for Hargrave after he played under me a few years ago, but after a couple of poor seasons I will keep a close eye on him over the next couple of weeks before putting him in. There was no form of forward pressure against the Pies and GWS so he had a field day. Having said that, his form did evevate him to my watch list. As Warnie said, I do like Howard and he is being groomed as the quarterback replacement for Gilbee which could potentially produce good scores. Once again, will need to watch him against teams the put some pressure on the defenders releasing the ball from the backline.

4. What are your current thoughts on the most expensive player in the competition, Dane Swan? 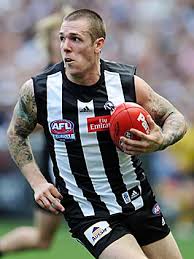 Roy – He is a fantacy pig so the bigger the better. Swanny is still firmly entrenched in the starting mids at destROY and he won’t be going anywhere. Mind you, he did look heavy, so I doubt I could move him even if I wanted.

Chook – I didn’t have him in my mids before the NAB started and that hasn’t changed… yet. I’m stubbornly sticking with teammate Scott Pendlebury at this stage, although the fact that Swannie didn’t know about McCaffer’s injury because he was checking his laptop at half-time (did he say that?) makes me wonder how clever it is to leave out someone who’s that obsessed with their DT output that they can’t even wait until the end of the game.

Tbetta – I couldn’t believe people were logging on to switch out Swan for Boyd after Saturday night; to me that is such an over-reaction. Actually, it would have been interesting to see how much his % ownership went down that night… Anyway, there’s nothing to worry about with Swanny! He couldn’t give any less of a shit about the nab cup, so we can’t take his scores there seriously. He’s still firmly entrenched in my side.

Warnie – Ahh, Swanny wasn’t in my controversial Pre-NAB Cup team that I put up on here, but I do want him and I think I’m moving towards starting with the Fantasy Pig and Gazza now. Don’t read anything into his games on the weekend – he didn’t even know whether they won or lost.

Calvin – Ha ha, what a bloody legend! Swan averaged 21d in NAB matches last year from 4 games and then averaged 35d in the first 4 games of the actual season. He doesn’t care about NAB shit and didn’t even know they won. He doesn’t care. You want to turn your back on Swanny… do so at your own risk!

5. Which player did you have your eye on that disappointed you in the first weekend of NAB?

Calvin – Zaharakis had 4d in his only game and he was on my radar, as was Koby Stevens who managed just 12 handballs (NO KICKS) in his 2 games. Both are on the outer of team Calvinator for now.

Roy – I had Koby Stevens locked despite obvious vest concerns but he has “kicked” himself out of consideration.

Chook – Not too many, really. It would have been nice if dual-position rooks like Devon Smith and Curtly Hampton smashed one out of the park, locking them into our mid/forward lines, but there’s still time to put up some big numbers yet.

Tbetta – Probably some of the rookies, like Devon Smith and Brendan Lee. Devon didn’t catch my eye at all, and Lee only had the 6 handballs in his single outing for the Bombers. Both sit down towards the bottom of the watchlist now, but a decent showing in a full-length match will have them right back in contention.

Warnie – I’ve always wanted Timmy Mohr in my team ever since I heard he was picked up by the Giants – knowing what he did running out of defence in the VFL last season. While the clangers mean nothing in DT per se, his role as the straight up full back isn’t going to be good for scoring. Sorry Timmy, I think I’m going to jump on another GWS rookie defender.

Thanks for reading! Stay tuned for the next edition… next week!