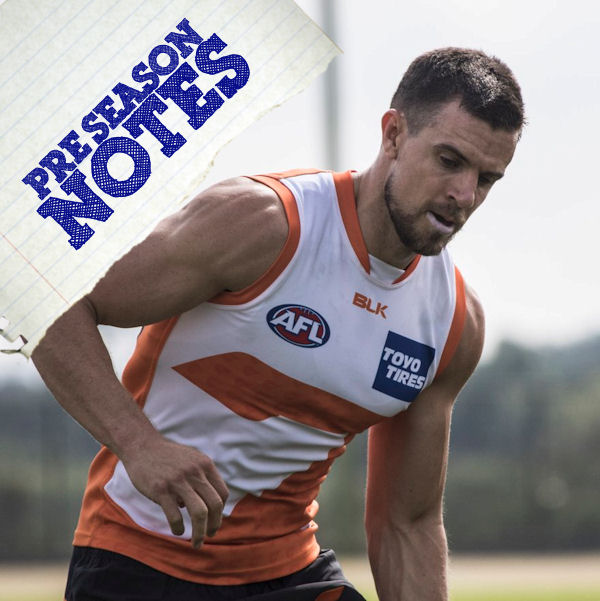 Hampton training with the midfield group

Former Giant Curtly Hampton who was played as a defender in his first four years of AFL before heading to the Crows, is now training with the midfield group. Hampton is yet to play a senior game for Adelaide, he played 11 games in the SANFL at an average of 70, but is looking be a key contributer in the midfield and has been given the opportunity by coach Don Pyke.

“I feel I can play my best footy through the midfield, just with the way I can move around in traffic and use my kick and break the lines from there,” Hampton said.

“I feel like in the backline I can feel a bit wasted at times.

“I spoke to the coaches and they said they would give me a chance, so Pykey (Adelaide coach Don Pyke) has stuck to his word.

“I’m with the midfield at the moment, so I’ve got to show them now.”

Hampton is named as a DEF for 2017 and is likely to be valued under $200K in Fantasy Classic.

Port Adelaide FWD Jarman Impey is implicated in a car crash from last night where a vehicle his four stationary cars. It’s a fair chance you may not want him in your Fantasy thoughts early in the season…

In an interesting article, Rodney Eade has said that Touk Miller will be a certain starter in 2017 no matter which players are available. He will be available as a FWD/MID and his 81.6 average is definitely below what he is capable. The Sun, going into his third season, finished the year posting scores of 135, 84, 111, 87, 75, 139, 105 and 98 with added midfield time as Gold Coast was decimated by injury.

O’Meara to join in full training after Christmas

It feels like we are going to get an update on Jaeger O’Meara every second day. Today we hear that he will join his new Hawthorn teammates on their pre-season camp in Mooloolaba in QLD and will be involved in some running. The 22-year-old has been confined to the anti-gravity treadmill.

Lycett to miss start of season

Eagles ruckman Scott Lycett will miss up to half of next season after the club revealed he wont be ready for round one as previously though.

We will remember Giles from his debut season where he was a Fantasy cash cow at the Giants, averaging 81.7 including a career high of 124. He played three games this year at an average of 64… meaning he should receive a discount that would price him at approximately 50 points per game. He scored 90 and 70 in his last two, averaging 28.5 hitouts. Giles has scored 80+ in 19 out of his 58 games with seven 100+ games.

If Vardy isn’t playing, then Giles could be a legitimate option.

"Scott Lycett might not be available for round one, so @drewpetrie20 adds a bit in that space for us. As well as @nvardy30" -AS on rucks

Demon Christian Petracca has dropped 6kg in his quest to improve his endurance sufficiently to earn more midfield time. CP5 played 17 games at an average of 67.8. He should improve on that in 2017 for his third year in the system, but will it be enough to warrant selection? Probably not.

AFL.com.au is reporting that Gary Ablett has stepped down as the Suns’ captain and may quit footy at the end of next season.

“In the back of my mind I want to play two years, but I can’t guarantee that and that’s because of everything that’s going on in my personal life,” he said.

“I’m contracted for another two years and I’ll sit down with the club at the end of this year and chat.

“Trying to juggle football life and life outside football, I need to see where things are at at the end of this year and I’ll make a decision then.”

This is very interesting for Fantasy as Gaz will be arguably underpriced in 2017 (see more on his stats below). I can’t wait to read his Deck of DT… it’ll make for some interesting choices. The annual series where we cover 52 players in 52 days starts on Boxing Day!

The rookie draft has been completed with 50 players selected. Clubs have until Wednesday for their final list lodgement. Here are some takes from the action this afternoon:

Stay tuned later this week as Tom adds his thoughts on the rookie draft.

All set for the rookie draft… pic.twitter.com/XODfFrwP0S

In a bit of a fluff piece, Hawthorn has given an update on Jaeger O’Meara saying that he is “feeling really good” and that the medical guys say he is “going really well”. He isn’t running out of the ground at this stage and there is no time frame on when he will join the main group.

According to a story on AFL.com.au, Gary Ablett is unlikely to captain Gold Coast next year as he deals with family issues and tries to regain full fitness. Will this be a good thing for Fantasy? I think so as Ablett is possibly ‘weighed down’ by the pressure and expectation of leading the club. Following an average of 101.2 this season, he will be underpriced in 2017 based on his best (from 2008 to 2014 he didn’t average less than 111.7).

After not starting training last week, Ablett was back today and took part in the 2km time trial.

Gaz is back @AFL pic.twitter.com/Bj89Tqa5dX