Is it three peat for the hawks or back-to-back-to-bust? Do the reigning premiers have many fantasy options or does their team first style of football make them irrelevant? 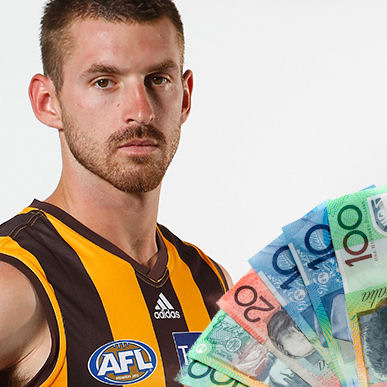 Is it three peat for the hawks or back-to-back-to-bust? Do the reigning premiers have many fantasy options or does their team first style of football make them irrelevant?

Jordan Lewis: Last season was by far this Hawks best fantasy season ever, previously his highest ever seasonal average was 94 back in 2007 and you’ve gotta go back to 2011 for the last time he scored multiple times in a season over 120. This now $621,000 averaged 109 for the season but wrapped up 2014 on fire with 6 consecutive tons at an average of 129.6. I’m not so confident he can do it again, so I might be looking to him as an upgrade target instead. Would be a unique option in starting squads.

Brendan Whitecross:  Earlier this month Ben Gogos wrote about WhiteX in our Deck of DT 2015, if you haven’t already you can read it here. He’s dirt cheap at $258,000 but the hawks have plenty of players banging down the selection door. He’s had previous seasonal averages of 88 as a forward back in 2012 so he can score well when given the opportunities. Is he in the Hawks best 22? He was a few seasons ago but alot of talent has been added since, if he is and can avoid the vests he could be the perfect conclusion to your on field defenders.

Jono O’Rourke:  He’s got alot of work in front of him but the former #2 draft pick is a brilliant addition to the Hawks midfield depth. In time Lewis, Hodge & Mitchell will all make way for the young brigade and JOR will be one of the next wave of Hawk guns. JOR is lightning quick, quality ball user and can play comfortably both inside and outside midfield roles. If you get a spare 5 minutes in the day watch his highlights package at under 18 level, the kid something special. At $220,000 he’s got plenty of cash to make for your team if he can break into the team early.

Sam Mitchell: This new position is more about the loss of position, he is now selectable as a midfielder only after being Def/Mid in 2014. 9 of his 13 games last season he score over 93 or more is more than handy, but the loss of DPP has made Sam Fantasy irrelevant this year. $526,000 is too much for someone whose likely to be managed throughout the season, but even at his best he’s only averaged over 103 once in his career. He’ll be a great contributor again to the Hawks 3 peat efforts, but from a fantasy perspective we bid you a farewell.

Luke Hodge: We’ve lost a ton of scoring defenders in 2015. No McVeigh, Hanley, Bartel or Mitchell are seeing fantasy coaches search the defensive depths for some options, thankfully we’ve still got Luke Hodge. He holds his Def/Mid eligability of $555,000 makes him one of the more expensive fantasy back options. In 2014 he scored 9 hundreds and equally as important only went under 81 four times. The fact is he’ll be managed during the home and away season for another finals assault so be prepared to have depth.