The Swans failed at the last hurdle on Grand Final day and 2015 smells like redemption. From a fantasy perspective that’s good news for owners. 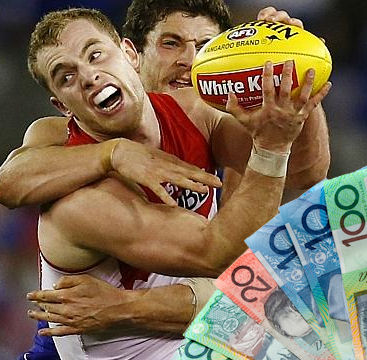 The Swans failed at the last hurdle on Grand Final day and 2015 smells like redemption. From a fantasy perspective that’s good news for owners.

Luke Parker: He was dominant for us last season as a Mid/Fwd and was the 7th highest scoring fantasy player overall. He didn’t miss a game and pumped out 13 hundreds last season including 5 in a row to wrap up 2014. Now costing us $585,000 and now a midfield only option many have forgotten about this Swan. But if he can continue his improvement (he’s only 22) I wouldn’t put it passed him pushing  to be his average over 110 this season if not more. To put Luke into perspective he’s $178,000 cheaper than Tom Rockliff (AFL Fantasy) and $90,000 than Gary Ablett.

Tom Mitchell: Last year I got burned bad by Titchell. By round four the mid/fwd was traded quickly out of my side. With a mixture of low scores and a brilliant Swans list it runied a big chunk of his season. While retaining his dual position this $432,000 is firming quickly again for many round 1 teams. The kid knows how to find the pill, with 8 of his 22 games scoring at 90 or more with huge scores of 144, 138 in his scoring bank. His average is so low largely due to some vest affected games, looking beyond that you can see he’s the midprice pick that can shoot right into premium forward status. Watch his role this pre-season, the Horse may do what we all hope and let the kid roam free in the guts.

Zak Jones:  For years the Swans have given us nothing with rookie options, but over the past few seasons they’ve given us the likes of Cunningham, Lloyd, Rampe and now Zac Jones. He played four games last season which were heavily vest affected and as such this defender is priced at $142,000. It’s a tough line up to crack into but he’s the competitive beat that the Swans love to have in their team, keep an eye on him. Like all Swans youngsters he’s a huge vest candidate.

Gary Rohan:  Last year he would’ve spent a considerable amount of time as the unused 8th forward in your team. Rohan spent the final few games of 2014 with a move to the

backline and it improved not only his fantasy scores but has seen him be selectable in fantasy 2015 as a defender. At $270,000 Gary’s spent the preseason training with the backs and with the absence of Malceski (Free agency move to the Suns) he could establish himself as the key ball user and carrier out of the Swans backline. While an average of 63 in his final 5 games isn’t exactly world changing, it’d take a a gutsy coach to place him in your starting squad.

Lance Franklin: After a slow start at the Swans Buddy boomed his way home in the final 13 games of 2014 averaging 105.46 in that time. In that run the now $536,000 forward scored 9 times above 100 including some a 122 against the power and a smashing 157 against St Kilda. The question is not “can Buddy score?” Cause he’s proven to be a premium option over a number of seasons. Rather it’s around the amount of games he misses. Due to either injury or suspension (generally the latter) Buddy hasn’t played over 20 games in a home & away season since 2008 and as such you’ll need good cover during the season. Will he continue on in this path? Do the Swans look to be less Buddy conscious?  Does the inclusion of Deledio, Swan, Ziebell and Goddard may make him more unique? Plenty of questions, for a full Buddy wrap check out  Rainman’s Deck of DT on him here.