Every year the Tigers offer plenty of Fantasy value, but with a great early draw we’ve got plenty of things to consider. 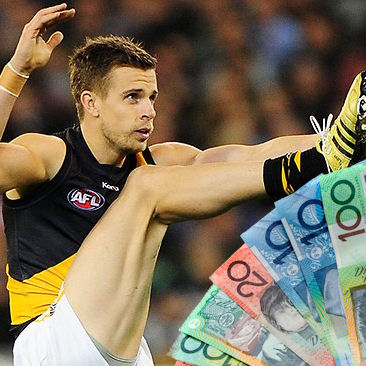 Every year the Tigers offer plenty of Fantasy value, but with a great early draw we’ve got plenty of things to consider.

Dustin Martin: For the second season in a row Dusty averaged 97 and again will be selected heavily as we can still grab him as a Mid/Fwd. At $553,000 he’s one of the most expensive forwards, but that’s because he’s one of the best. 11 times he punched out a score of 100+ and a further 3 in the 90’s and I’ll be expecting a similar output in 2015. The great thing about Dusty is he doesn’t deliver horrid fantasy scores, his lowest score last season was 71. Yes, it’s not ideal, but it’s not a 40 or 50 that can really sting. Only injury will prevent him from being a top 6 scoring forward this season.

Nick Vlastuin: While some would say last season wasn’t as ‘impressive’ as his first 7 games where he averaged 87 including a massive 131, i’ve been very impressed with his work ethic and contribution to the teams success. The Tigers love this kid and as a Mid/Def at $370,000 he’s got some value, flexibility and the skill set to be a premium defender in 2015. Value for money is key in Fantasy especially in our backlines with limited safe premiums. If Vlossy can sneak some extra midfield minutes he’ll be a good investment.

Kane Lambert:  He could be Anthony Miles version 2 as   Kane has dominated the VFL for seasoans and is a competitive ball beast. In 2013 he was 1 vote away from winning the Liston Medal. At a basement price of $120,000 this dual position mid/fwd will need to be elevated from the rookie list to be considered. But if he does keep an eye on him, in last seasons semi final Lambert gathered 32 touches, 17 clearances, 15 inside 50s and booted four goals.

Brett Deledio:  We may have lost plenty in the forward lines from last season but Deledio is one of the great gains. Now selectable as a Mid/Fwd at $548,000 he is a must. Last year was one of Lids’ worst seasons of recent history (due to an injury that affected him playing and his scoring output.) 2014 was the first time in 7 seasons he didn’t play every game. When the Tigers clicked in the second half of the season so did he, his opening 9 games he averaged 83 and scored over 100 twice. However, in his final 9 he averaged 109.5 and scored 6 times above 100 including the final 5 games. If that’s not enough, in those last 9 games his lowest score was a 90. Seriously, lock him away he’ll be one of the best (if not the) scoring forwards this season.

Brandon Ellis : The beauty of the Tigers team is you could argue a case for nearly a dozen of them being placed as one to watch, for me this time I’ve landed on Ellis. He’s flying again this preseason as he has for the past few seasons. He started 2014 slowly with only two scores above 67 in the opening 5 games. From then Ellis switched on and only went below 79 just once. From rounds 10 – 16 Brandon registered 7 hundreds in a row including 4 over 115. As an owner of him during that time it was a beautiful thing to enjoy. He’s pricey at $544,000 but has the potential to add nicely to his average.