For years Gold Coast Skipper Gary Ablett has been a walk up start in our fantasy teams, but should he be a member of your starting squad? 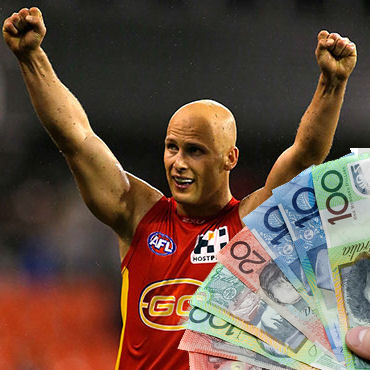 For years Gold Coast Skipper Gary Ablett has been a walk up start in our fantasy teams, but should he be a member of your starting squad?

Gary Ablett: Only injury prevented him from a Brownlow medal (again) and quite possibly the #1 scoring mantle in fantasy (again). Prior to his round 16 injury that ruined his year he’d had only 3 games where he scored under 118, yet is priced at an average of 119 at $675,000. According to medical staff he’ll be at full fitness and strength as the Suns return to pre season training and only a change of role will stop him pumping out the weekly 120+’s. Nearly $100,000 cheaper than Rocky too.

Trent McKenzie:  The arrival of former Swan Nick Malceski could be the greatest thing to happen to this left footed cannon. Over recent seasons he’s struggled with hamstring injuries and even with some forward tags. So far we haven’t seen many “must have” defenders and as such the selection of the right mid range priced selections are crucial. At $398,000 he’s got just enough value in him to make him worth considering.

Jarrod Garlett:  He screams vest alert but if he can be free of it this $255,000 midfielder could be a game breaker for the Suns. He posses many qualities that are reminiscent of Sydney’s Lewis Jetta and all the silky skills of premiership Hawk Cyril Rioli. He finished Top 10 in a large number of categories at the draft combine and has already had a taste of senior footy playing for South Fremantle in the WAFL. Doesn’t have huge fantasy numbers at that level, so just be careful, don’t let his highlight reel sucker you in.

Jack Martin:  This former mini draft selection was a midfielder, now a straight forward and depending on the squad set up Martin’s potential a perfect 5th or 6th forward. Priced at $285,000 he’s capable of hundreds as evidenced with his final game in 2014 a with a round 23 score of 102. He’s put on 5kg of solid muscle in the pre season and in his last 2KM time trial he ran a personal best. If some of our cheaper forward options don’t come on then look seriously to Jack Martin to finish your on field forward line.

Jarrod Harbrow: This original sun has gained dual position status and is now selectable as a Mid/Def at $429,000. With the likes of fellow sun David Swallow and Queensland rival Pearce Hanley now eligible as a midfielders only we have lost some of last years best scoring defenders. Last year Jarrod was the 16th highest scoring defender and twice in his 8 year career he’s averaged over 80. Similarly to McKenzie the arrival of All Australian Nick Malceski can only help his scoring and potentially see him more permanently based on the wings.