12 months ago the Lions had the plague, this year they’ve landed 2 big trades + getting an elite kicker back. Things are on the up for the lions, but do they have fantasy friendly players? 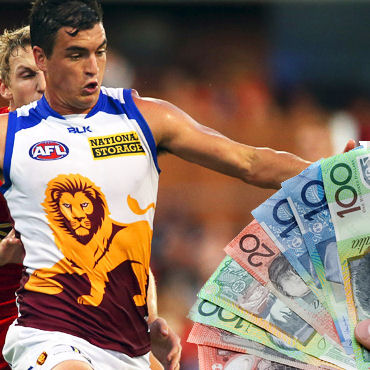 12 months ago the lions had the plague, this year they’ve landed 2 big trades + getting an elite kicker back. Things are on the up for the lions, but do they have fantasy friendly players?

Tom Rockliff: This will be the debate all preseason and within the opening 6 rounds we’ll know who got it right. Can you afford to start with Rocky? Or can you not afford to pass on him? $763,000 is a massive chunk of your salary cap. Does the inclusions of Beams, Christensen plus the returning Rich impact his scores? Only time will tell, lets hope we’re all on the right side of the equation.

Daniel Rich:  Plenty of coaches were hoping that Rich may sneak dual position status and be eligible as a defender, sadly not. Regardless at $268,000 he’s nearly $30,000 cheaper than #3 draft selection Angus Brayshaw and given a tasty discount due to missing most of 2014. In 2011 & 2012 he posted seasons averaging 80 & 85 and right now he’s priced about half that.

Josh McGuinness:  He was picked late in the draft at #81, because of that he’s priced at $142,000. This defender could be 2015’s Tom Langdon. Averaged 26 touches at nationals  and is very clean with his marking as well as his use of the ball. A handy 3rd tall option for the lions too who are needing some youth in the backline.

Allan Christensen: A new club, and now back to dual position status of Mid/Fwd after spending 2014 selectable as a midfielder only. He’s promised to break out for years at Geelong but at $440,000 he’s priced nicely enough to serious consider. If he can get over his back injuries he’s every chance of knocking around a 90 average for fantasy coaches.

Matthew Leuenberger: Last year we were blessed with Aaron Sandilands in our rucks, a once proven premium at a bargain price. In 2011 he averaged 92 playing 22 games, the following he only managed 5 games. 2013 he played 20 games for an average score of 85. As you can see when Matthew is fit he’s one of the better ruck options around (Berger looms to be one of this years ruck bargains at $277,000.