As we enter into the fourth year of the Giants they have a ton of players right on the verge of premium status and some handy midpricers, but which are the ones to watch? 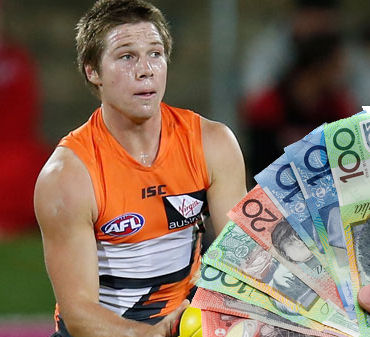 As we enter into the fourth year of the Giants they have a ton of players right on the verge of premium status and some handy midpricers, but which are the ones to watch?

Toby Greene: Toby flew home in 2014 with 7 of his last 9 games scoring 100 or more. His final 5 games went at an average of 131, that makes his price tag of $583,000 look like a bargain if he can smash that out all year. However, in his 10 games prior he only twice went over 93. You could make an argument though he’s fools gold at that price. He’s not the best ball user and the Giants have to fit in: Griffen, Coniglio, Treloar, Ward, Shiel, Whitfield, Scully all into the midfield with pinch hitting from Smith, Kelly, Hoskin-Elliott and Palmer. Just as easily he could be the next to join “Pig Status” from Calvin. At that price he’s got an element of risk, maybe best to make him an upgrade target.

Will Hoskin-Elliott:  Every year we’ve got a ton of players in the midprice range, many look like they’ll “breakout” to premium status. Many of these bust and a select few work out. The hyphen could well be either one. This newly found forward will set you back $384,000 and could find himself among the premium scorers as a forward in fantasy. His 2014 average of 67 isn’t flash but his final 6 games saw him go at an average of 86 and that included a horrible 44.  He’s got all the making’s of a Nathan Fyfe V2, and his fourth year in the system has him a real candidate to break out.

Jack Steele:  Although the midfield depth is very deep at the Giants (which we’ve already highlighted), Steele is one player who could break into the team due to his ability to equally as damaging on the midfield and also deep forward. He has been awarded Mid/Fwd status and at $227,000 he’s nearly $70,000 cheaper than fellow draftee Petracca who has the same DPP status.

Joshua Kelly: Gaining dual position status Kelly is now a midfield/forward option. Priced at $395,000 he played 18 games in his debut season and ended the year very nicely with scores of 83, 117 & a massive 140 in the final 3 games. It might be a year too early but he’s got the capacity & capability to be a damaging fantasy player both now and for the next decade. One of he or hyphen will explode & knowing Murphy’s law it’ll be the one you don’t own lol.

Devon Smith: A week ago Warnie, Calvin & Roy announced some massive inclusions for the forward lines with Swan, Goddard, Deledio and Ziebell all some of the names gaining Mid/Fwd DPP for Fantasy in 2015. If your looking for a unique forward who still has upside then Devon Smith is your guy. He comes at a hefty $533,000 but he can smash out massive numbers. 8 of his last 9 games in 2014 he scored over 91 including a massive 147. You’ll need some uniqueness in your team to gain the edge, and Devon is one of the better ones up front.